IDH mutant diffuse and anaplastic astrocytomas have similar age at presentation and little difference in survival: a grading problem for WHO | springermedizin.de Skip to main content
TOOLBAR 1 2 3 4
SUCHE MENÜ 1 2 3 4

The WHO 2007 classification of tumors of the CNS distinguishes between diffuse astrocytoma WHO grade II (A IIWHO2007) and anaplastic astrocytoma WHO grade III (AA III WHO2007). Patients with A II WHO2007 are significantly younger and survive significantly longer than those with AA III WHO2007. So far, classification and grading relies on morphological grounds only and does not yet take into account IDH status, a molecular marker of prognostic relevance. We here demonstrate that WHO 2007 grading performs poorly in predicting prognosis when applied to astrocytoma carrying IDH mutations. Three independent series including a total of 1360 adult diffuse astrocytic gliomas with IDH mutation containing 683 A II IDHmut, 562 AA III IDHmut and 115 GBM IDHmut have been examined for age distribution and survival. In all three series patients with A II IDHmut and AA III IDHmut were of identical age at presentation of disease (36–37 years) and the difference in survival between grades was much less (10.9 years for A II IDHmut, 9.3 years for AA III IDHmut) than that reported for A II WHO2007 versus AA III WHO2007. Our analyses imply that the differences in age and survival between A II WHO2007 and AA III WHO2007 predominantly depend on the fraction of IDH-non-mutant astrocytomas in the cohort. This data poses a substantial challenge for the current practice of astrocytoma grading and risk stratification and is likely to have far-reaching consequences on the management of patients with IDH-mutant astrocytoma. 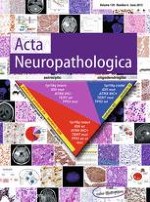 Primary leptomeningeal melanoma is part of the BAP1-related cancer syndrome