An unusual occurrence of idiopathic nodular panniculitis of an extremely large size was recognised in a German Shepherd dog. The dog was presented with a large subcutaneous nodule at the latero-ventral aspect of the abdomen on the left side of the animal. The lesion grossly appeared as a large tissue mass resembling some kind of adipose tissue tumour such as lipoma or liposarcoma. However, the histologic appearance of the tissue mass was indicative of nodular panniculitis as reflected by diffuse cellular inflammatory reaction on a wide area of adipose tissue. The cellular infiltrate was mainly dominated by lymphocytes together with scattered histiocytes, plasma cells and neutrophils. The interlobular septa were greatly thickened by massive infiltration of inflammatory cells and septal fibrosis. 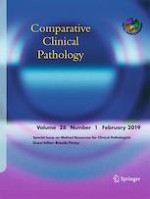