Associations of BMI with body composition and health outcomes may differ between Asian and European populations. Asian populations have also been shown to have an elevated risk of type 2 diabetes, hypertension, and hyperlipidemia at a relatively low level of BMI. New surgical indication for Asian patients should be discussed by the expert of this field. Forty-four bariatric experts in Asia-Pacific and other regions were chosen to have a voting privilege for IFSO-APC Consensus at the 2nd IFSO-APC Congress. A computerized audience-response voting system was used to analyze the agreement with the sentence of the consensus. Of all delegates, 95% agreed with the necessity of the establishment of IFSO-APC consensus statements, and 98% agreed with the necessity of a new indication for Asian patients.
IFSO-APC Consensus statements 2011
Other eight sentences are agreed with by majority of the voting delegates to form IFSO-APC consensus statements. This will help to make safe and wholesome the progress of bariatric and metabolic surgery in Asia. 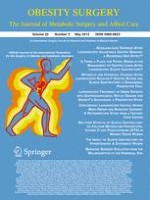 Sociodemographic Trends in Bariatric Surgery Utilization in the USA

Comment on: Functional Importance of Laparoscopic Sleeve Gastrectomy for the Lower Esophageal Sphincter in Patients with Morbid Obesity

The Impact of Sleeve Gastrectomy on Hypertension: A Systematic Review