The online version of this article (https://​doi.​org/​10.​1007/​s11102-018-00930-y) contains supplementary material, which is available to authorized users.
Keitaro Kanie and Hironori Bando have equally contributed to this work.

In this cohort study, we screened IgG4-related hypophysitis via pituitary magnetic resonance imaging (MRI) and endocrinological examination in 27 patients who were undergoing follow-up for autoimmune pancreatitis at Kobe University Hospital between 2014 and 2018.

Although a large-scale study is necessary to validate these results, these data suggest that the prevalence of hypophysitis in patients with autoimmune pancreatitis may be underestimated. Based on our findings, we recommend screening for hypophysitis, especially in patients with multiple organ involvement. 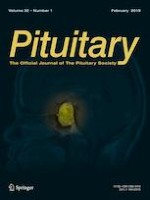 Thyrotropin-secreting pituitary adenomas: a systematic review and meta-analysis of postoperative outcomes and management

Physicians’ awareness of gadolinium retention and MRI timing practices in the longitudinal management of pituitary tumors: a “Pituitary Society” survey

Response to letter to the editor from Professor Jean-François Bonneville