Natural killer cells play a major role in innate immunity against tumor and virus-infected cells. NK cells express activating and inhibitory receptors to regulate their function. It has been established that modulation in the NK cell receptor profile results in altered function of NK cell against target cells. Here, we study the effect of IL-2 stimulation on NK cell inhibitory receptors Ly49A, Ly49C, and activating receptor Ly49D in C57BL/6 mice. It was observed that there was significant increase in expression of Ly49A but no change in expression of Ly49C and Ly49D on IL-2 stimulation. We further noticed that although IL-2 stimulation increased the NK cell population and expression of activation marker NK1.1 but IL-2 stimulation does not cause hyper-responsiveness in NK cells, as there was no increase in MIP-1α and IFN-γ production in IL-2 stimulated NK cells as compared to unstimulated controls. These findings provide a framework to understand the effect of IL-2 stimulation on cognate and non-cognate receptor ligand interactions and suggest stratagies for immunotherapies in conjunction with IL-2 combinatorial therapies. 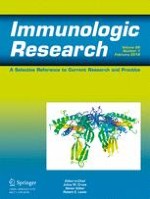 CD28neg. T lymphocytes of a melanoma patient harbor tumor immunity and a high frequency of germline-encoded and public TCRs

Dual neutralization of TNFR-2 and MMP-2 regulates the severity of S. aureus induced septic arthritis correlating alteration in the level of interferon gamma and interleukin-10 in terms of TNFR2 blocking