IL-33 played an important role in inflammatory diseases as evidenced by their high levels of expression in diseased tissues. Previous studies showed that IL-33/ST2L signal transduction pathway participated in epithelial-mesenchymal transition (EMT) of A549 cells. Cytokine IL-1β can increase the expression of MMPs by activating NF-kB. The excessive or inappropriate expression of MMP-9 may randomly and non-selectively destroy the extracellular matrix. TIMP-1 (tissue inhibitor of MMP-9) effects on ebb and flow of ECM by inhibiting activation of MMP-9. Therefore, IL-33 may take part in the process of pulmonary fibrosis by regulating expressions of MMP-9 and TIMP-1. To explore the acting mechanism of IL-33 in pulmonary fibrosis, proliferation of the human embryonic lung fibroblasts and expressions of related signal molecules was analyzed in vitro. We cultured HELF cells and stimulated HELF with rhIL-33 at different time points (24, 48, 72 h) and different concentrations respectively. The expression of the receptor ST2L was analyzed by RT-PCR and the proliferative rate of HELF was tested by MTT. The expressions of collagen IV, MMP-9, TIMP-1, and critical signal transducer TRAF-6 and NF-kappaB were tested by Western blotting. The rhIL-33 can promote proliferation of HELF and the concentration of 10 ng/ml was most significant at 72 h (P < 0.05). Hence, this experiment chose 10 ng/ml as stimulated concentration at following experiments. The expressions of collagen IV, MMP-9, TIMP-1, TRAF-6, and NF-kappaB increased and then reduced in protein levels at different time points (0, 6, 12, 24, 48, 72 h) (P < 0.05). IL-33 participates in the production of profibrotic cytokines and formation of mesenchymal substances in early inflammatory responses of pulmonary fibrosis. IL-33 can regulate deposition of ECM and promote the process of pulmonary fibrosis by inducing the imbalance between MMP-9 and TIMP-1. 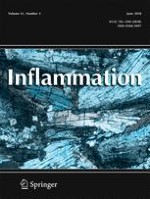