To characterize the clinical and imaging features of pediatric renal medullary carcinoma at initial presentation.

We retrospectively analyzed images of 25 pediatric patients with renal medullary carcinoma enrolled in the Children’s Oncology Group renal tumors classification, biology and banking study (AREN03B2) from March 2006 to August 2016. Imaging findings of the primary mass, and patterns of locoregional and distant spread were evaluated in correlation with pathological and surgical findings.

Median age at presentation was 13 years (range: 6-21 years), with a male predominance (3.2:1). The overall stage of disease at initial presentation was stage 1 in 1, stage 2 in 2 and stage 4 in 22. Maximum diameter of the primary renal mass ranged from 1.6 to 10.3 cm (mean: 6.6 cm) with a slight right side predilection (1.5:1). Enlarged (>1 cm short axis) retroperitoneal lymph nodes were identified at initial staging in 20/25 (80%) cases, 10 of which were histologically confirmed while the others did not undergo surgical sampling. Enlarged lymph nodes were also identified in the mediastinum (14/25; 56%) and supraclavicular regions (4/25; 16%). Metastatic disease was present in the lungs in 19/25 (76%) and liver in 6/25 (24%). The pattern of lung metastases was pulmonary lymphangitic carcinomatosis: 10 cases (9 bilateral, 1 unilateral), pulmonary nodules with indistinct margins: 6 cases, pulmonary nodules with distinct margins: 2 cases, while 1 case had pulmonary nodules with both indistinct and distinct margins. Pulmonary lymphangitic carcinomatosis was pathologically confirmed in 4/10 cases. All cases with pulmonary lymphangitic carcinomatosis had associated enlarged mediastinal lymph nodes.

Renal medullary carcinoma in children and young adults presents at an advanced local and distant stage in the majority of patients. The diagnosis of renal medullary carcinoma should be considered when a child or young adult presents with a poorly defined/infiltrative, centrally located renal mass, especially in the setting of known sickle cell hemoglobinopathy. Distant metastases are common at initial presentation in the lungs, distant lymph nodes and liver and often involve multiple sites simultaneously. Pulmonary lymphangitic carcinomatosis, a distinctive and uncommon form of lung metastasis in children, is common in this patient population. 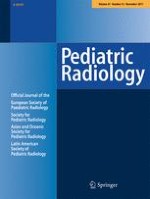 Reply to Lancelot et al.: ‘Lack of evidence of a relationship between magnetic resonance signal intensity changes in the globus pallidus and dentate nucleus, and repeated administrations of gadoterate meglumine in children’

Apparent diffusion coefficient as it relates to histopathology findings in post-chemotherapy nephroblastoma: a feasibility study