Bilingualism has been shown to affect the structure of the brain, including cortical regions related to language. Less is known about subcortical structures, such as the basal ganglia, which underlie speech monitoring and language selection, processes that are crucial for bilinguals, as well as other linguistic functions, such as grammatical and phonological acquisition and processing. Simultaneous bilinguals have demonstrated significant reshaping of the basal ganglia and the thalamus compared to monolinguals. However, it is not clear whether these effects are due to learning of the second language (L2) at a very young age or simply due to continuous usage of two languages. Here, we show that bilingualism-induced subcortical effects are directly related to the amount of continuous L2 usage, or L2 immersion. We found significant subcortical reshaping in non-simultaneous (or sequential) bilinguals with extensive immersion in a bilingual environment, closely mirroring the recent findings in simultaneous bilinguals. Importantly, some of these effects were positively correlated to the amount of L2 immersion. Conversely, sequential bilinguals with comparable proficiency and age of acquisition (AoA) but limited immersion did not show similar effects. Our results provide structural evidence to suggestions that L2 acquisition continuously occurs in an immersive environment, and is expressed as dynamic reshaping of the core of the brain. These findings propose that second language learning in the brain is a dynamic procedure which depends on active and continuous L2 usage. 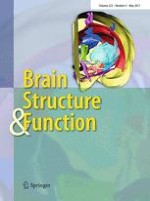 Revisiting the human uncinate fasciculus, its subcomponents and asymmetries with stem-based tractography and microdissection validation

Cerebello-cerebral connectivity in the developing brain