Immunofluorescence mapping of dystrophin in the rat brain: astrocytes contain the splice variant Dp71f, but this is confined to subpopulations | springermedizin.de Skip to main content
SUCHE MENÜ 1 2 3 4

Dystrophins are membrane-associated actin-binding proteins, recognized at first in muscular dystrophies. In the brain the full-length Dp427 has been detected, as well as Dp140 and Dp71 of the shorter variants. Dp71 seems to be their major representative in the brain, and it occurs as splice variants, Dp71f and Dp71d. Dystrophins have been demonstrated mainly in neurons. In tissue cultures, the glial data, mainly in situ, are still insufficient. The present mapping study reveals the astroglial localization of the splice variant Dp71f, using a monoclonal antibody (5F3, developed by D. Mornet) specific for its additional 31 last amino acids. In parallel, another monoclonal antibody was used (Dys2, Novocastra) that detects the Dp71d, Dp427, as well as Dp140 and other short variants. Rats were overdosed with ether and perfused transcardially with 4% phosphate-buffered paraformaldehyde solution. Floating Vibratome sections were processed for immunohistochemical labeling with fluorescent secondary antibodies. In some animals the reactive glia were investigated following stab wounds in ketamine-xylazine anesthesia. Only the 5F3 antibody labeled astrocytes, however, not in general but in special localizations, mainly along the glia limitans of the pial surface, below the ependyma and in the reactive glia. Perivascular astrocytes were consistently labeled only where the vessels entered the brain, and in some circumventricular organs. The 5F3 antibody also labeled the ependyma and the residual subventricular zone. In contrast to the astrocytes, neurons were labeled throughout the brain. Dys2 antibody (to Dp71d and longer isoforms) labeled neurons in a distribution similar to that of 5F3, but rarely labeled astroglia and only in perivascular rings. Dp71f positivity seems to occur in those astrocyte populations that proved to be immunopositive to glial fibrillary acidic protein (GFAP) and produced laminin in former studies.
Anzeige 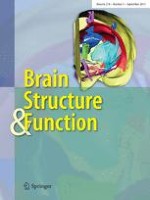