Liver stiffness (LS) has been reported to be a marker of liver congestion caused by elevated central venous pressure in heart failure (HF) patients. Recent studies demonstrated that LS could be non-invasively measured by virtual touch quantification (VTQ). However, its prognostic implication in patients with acute decompensated heart failure (ADHF) is unclear. This study sought to determine whether LS measured by VTQ could be a determinant of subsequent adverse events in ADHF patients. We prospectively recruited 70 ADHF patients who underwent LS measurement by VTQ on admission in our university hospital between June 2016 and April 2018. The primary outcome of interest was the composite of all-cause mortality and worsening HF. During a median follow-up period of 272 (interquartile range 122–578) days, there were 26 (37%) events, including 5 (7%) deaths and 21 (30%) cases of worsening HF. The c-index of LS for predicting the composite of adverse events was 0.77 (95% CI 0.66–0.88), and the optimal cut-off value of LS was 1.50 m/s. Adverse events were more frequently observed in patients with high LS (≥ 1.50 m/s) compared to those with low LS (< 1.50 m/s). Multivariable Cox regression analyzes revealed that higher LS was independently associated with increased subsequent risk of adverse events after adjustment for confounders. In conclusion, high admission LS was an independent determinant of worse clinical outcomes in patients with ADHF. This finding suggests that LS on admission is useful for risk stratification of patients with ADHF. 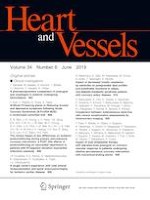 A pharmacodynamics comparison of prasugrel and clopidogrel in patients undergoing hemodialysis

Cost-effectiveness for prevention of thromboembolism by anticoagulants in non-valvular atrial fibrillation: additional analysis from the Hokuriku˗Plus AF Registry