The online version of this article (doi:10.​1245/​s10434-016-5249-5) contains supplementary material, which is available to authorized users.
This study was presented as a podium presentation at the 69th Society of Surgical Oncology Annual Cancer Symposium, Boston, MA, USA, 2–5 March 2016.

Age is a known risk factor for recurrence in women with ductal carcinoma in situ (DCIS) treated with breast-conserving surgery (BCS). We explored the relationship between age, other risk factors, and recurrence.

The risk of recurrence of DCIS decreases with age. This effect is particularly strong at the extremes of age and is independent of other clinicopathologic factors. The oldest women are at low risk of recurrence, while the youngest women have a higher overall, and especially invasive, recurrence rate, although mortality remains low. These findings should be incorporated into risk/benefit discussions of treatment options. 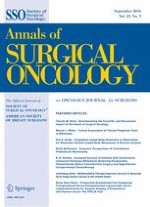 A Role for Tumor Volume Assessment in Resectable Esophageal Cancer