During transcranial direct current stimulation (tDCS), the amount and distribution of current that reaches the brain depends on individual anatomy. Many progressive neurodegenerative diseases are associated with cortical atrophy, but the importance of individual brain atrophy during tDCS in patients with progressive atrophy, including primary progressive aphasia (PPA), remains unclear.

In the present study, we addressed the question whether brain anatomy in patients with distinct cortical atrophy patterns would impact brain current intensity and distribution during tDCS over the left IFG.

We found that the differences in brain current flow across the three PPA variants fall within the distribution of anatomically typical adults. While clustering of electric fields was often around individual gyri or sulci, the minimal distance from the gyri/sulci to skull was not correlated with electric field intensity. 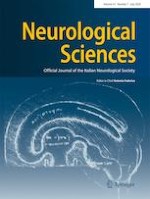 Is it the right time for an infant screening for Duchenne muscular dystrophy?

The assessment of severe lexical disorders in Italian individuals with aphasia

The effectiveness of various cytotherapeutic strategies for the treatment of ischemic stroke: a Bayesian network meta-analysis of randomized controlled trials