This retrospective cohort study used linked, population-based health databases from Ontario, Canada. Among individuals diagnosed with CRC from 2007 to 2015, we compared the likelihood of presenting with later- (III or IV) vs early- (I or II) stage CRC between patients with and without diabetes adjusting for relevant covariates. We then determined the association between diabetes and all-cause and CRC-specific mortality, after adjusting for CRC stage at diagnosis and other covariates.

Individuals with diabetes who develop CRC are not more likely to present with a later stage of CRC and have similar cancer-specific mortality compared with those without diabetes. Diabetes was associated with higher all-cause mortality in CRC patients, indicating that greater attention to non-cancer care is needed for CRC survivors with diabetes. 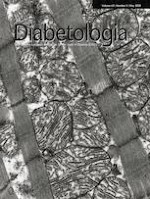 Effect of familial diabetes status and age at diagnosis on type 2 diabetes risk: a nation-wide register-based study from Denmark

Associations of dicarbonyl stress with complement activation: the CODAM study