The inflammatory response during sepsis has been recognized as cause for progressive systemic organ failure. TNF-α was demonstrated to induce a progressive decrease in cardiovascular function, [ 1] and high level of IL-6 correlate with a significant mortality increase in septic patients [ 2]. However, several clinical studies have failed to show a sustained survival benefit from reducing immune reaction by administering anti-endotoxin antibodies, anti-TNF antibodies or soluble TNF-α receptors [ 3, 4]. For antibiotics, previous studies have pointed out potential immunomodulatory effects apart from their antimicrobial effect. This has been shown among others for macrolides [ 5– 7], tetracyclines [ 7, 8], and fluoroquinolone. [ 7, 9, 10] Apart from data on the immunomodulatory effect in vitro and in vivo, studies on the clinical implication of the immunomodulatory characteristics of clarithromycin administration showed a considerable benefit in time to resolution of ventilator-associated pneumonia compared to placebo as well as improvement of mortality [ 3, 11]. Even when sepsis was caused by pneumonia due to macrolide-resistant pathogens, improved mortality rates point out that non-antimicrobial effects are the underlying cause of benefit [ 12].
Besides and on top of bacterial sepsis, invasive fungal infections are increasingly problematic for severely ill and immunosuppressed patients, especially for those receiving intensive cytostatic treatment for acute leukemia, hematopoietic stem cell transplants (HSCT) or solid organ transplants, causing considerable morbidity and mortality rates [ 13]. In particular numbers of invasive fungal infections caused by molds such as Aspergillus are increasing [ 14] and invasive pulmonary aspergillosis is the most common cause. Even when sepsis was caused be for pneumonia-related mortality in patients with leukemia or HSCT recipients showing an overall mortality rate of invasive aspergillosis of 58–87% in patients who receive bone marrow transplants [ 15].
Anzeige
Cytokine dysregulation seems to play a major role in the pathogenesis and outcome of fungal infections [ 16, 17]. Potential pathways of dysregulation may include binding of fungal ligands and pattern recognition receptors, like Toll-like receptors, on innate immune cells. Thereby intracellular signaling cascades are activated and lead to an inflammatory response in the host, beneficial for the patient or not [ 17]. Antifungals play an essential role in current treatment and prophylaxis in this population [ 16, 18, 19] and more information about potential immunomodulatory effect of antifungal agents in analogy to antibacterial agents would be desirable.
The present study aimed to establish an in vitro aspergillosis model in whole blood to study the immunomodulatory effect of antimycotics.

27 healthy male volunteers were included in this trial. Inclusion criteria were age between 19 and 40 years as well as laboratory parameters within the given range or abnormal parameters which were not clinically relevant. None of the volunteers had concomitant medication within 1 week or symptoms of clinically relevant illness within 3 weeks prior to the study day. Furthermore, subjects were excluded if they were smoking more than 5 cigarettes per day or had treatment with an investigational drug within 3 weeks or blood donation within 4 weeks before the study.
Anzeige

During the pilot of the study blood samples were collected by venipuncture using Vacutainer tubes anticoagulated with EDTA (Vacuette ®). The first experiments of adding both hyphal fragments and antimycotic agents showed that blood samples became hemolytic using EDTA tubes. To optimize the model and avoid hemolysis, Citrate tubes were used for blood sampling and Falcon Tubes (TPP Techno Plastic Products AG) for incubation in the main part.

For establishment of an aspergillosis model in human whole blood in vitro blood samples from the first 7 volunteers was used. The cytokine time profiles induced by different conidia counts (10 7 conidia/mL and 10 8 conidia/mL) and inactivated as well as active hyphal fragments at different concentrations obtained from a prior conidia count of 10 6 conidia/mL were compared with cytokine time profiles induced by LPS (US Standard Reference Endotoxin E. coli, CC-RE-Lot 2) 50 pg/mL and negative (saline) control. This comparison was performed to identify the stimulus—conidia or hyphal fragments—of greatest potency on cytokine release. LPS concentration of 50 pg/mL was used congruently with a prior study [ 20]. The cultivation of conidia and hyphae was performed as follows:
Cultivation of conidia Aspergillus fumigatus ATCC204305 was cultured for 2–4 days on Sabouraud Dextrose agar (Becton–Dickinson, Netherlands). After the incubation time, 3–5 mL of spore buffer was pipetted on the Sabouraud agar plate and conidia were scraped from the plate using an inoculation loop. The suspension of spore buffer containing conidia was collected with a single use pipette and filtered with a cell retainer (70 µm). Conidia were diluted 100–1000-fold and counted in a hemocytometer (Bürker Türk Kammer, VWR Merck). Conidia suspensions containing different counts per mL (10 7 conidia/mL and 10 8 conidia/mL) were stored at − 4 °C.
Cultivation of hyphae 30 mL of the conidia suspension containing 10 6 conidia/mL was inoculated into 30 mL of Nitrogen Base in Erlenmeyer flasks. Incubation was performed for approximately 16 h at 37° at a shaker before the content of the Erlenmeyer flasks was centrifuged at 4000 rpm for 15 min. The pellets were washed twice in HBSS and then resuspended in PBS (Lonza, Basel, Swiss) to achieve the same volume as initially added as conidia suspension. For inactivating hyphal fragments, the gained pellets were then autoclaved at 121 °C for 15 min in a glass tube. As inactivation control, a sample was placed on one Sabouraud Dextrose agar plate (Becton–Dickinson, Netherlands) and observed for 3 days for lack of growth after incubation. The further procedure was the same for both, inactivated and vital hyphal fragments. The pellets were washed twice with HBSS (Gibco/Life Technologies) and finally again resuspended in HBSS in the same volume as initially added as conidia suspension. For all experiments with hyphae either 1 mL of solution of vital or of inactivated hyphae was added to human whole blood for further incubation.
Establishment of the aspergillosis model Aspergillus fumigatus conidia suspension of different conidia counts of 10 7/mL and 10 8/mL, as well as active and inactivated hyphal suspensions containing hyphae starting from the prior conidia count of 10 6 conidia/mL were studied. To 4 mL of whole human blood in 14-mL falcon tubes, either 1 mL of the hyphal suspension, or conidia suspension getting a low and a high conidia concentration of finally 7 × 10 5 or 7 × 10 6 conidia/mL, or LPS getting a final concentration of 50 pg/mL or saline solution as negative control were added, respectively. Before incubation, baseline samples were taken without any addition of stimuli. All blood samples were then incubated at 37° and samples were taken at 2 h, 4 h or 6 h, 8 h and 24 h after start of incubation. Samples were centrifuged at 2500 g for 10 min and plasma pipetted into Cryo Vials for storage at − 80 °C before ELISA was performed. The levels of IL-6 and TNF-α were determined.
Several inocula (conidia and hyphal fragments) were tested as described above, but solely one was used for the final aspergillosis model in the main part of the study. Thereby the impact of several antifungal agents with and without addition of A. fumigatus could be tested for each individual with a justifiable amount of blood. Since inactivated hyphal fragments starting from a conidia count of 10 6 conidia/mL demonstrated the most potent cytokine release when compared to conidia or active hyphal fragments, this inoculum was used. Duration of the main experiments was limited to 4 h since, in line with previous experience from LPS experiments maximum cytokine release was found for this time-point for the majority of subjects.

Main part: incubation of antimycotics in the established model

20 participants were included in the main part of the study on the impact of antimycotics on cytokine levels in the established aspergillosis model with hyphal fragments. 1 mL of hyphal suspension obtained from an original suspension containing 10 6  conidia/mL, or saline solution were added to 4 mL of whole blood. All experiments were performed as duplicates. The impact of final concentrations of 5 mg/L conventional and 5 mg/L liposomal amphotericin B, 20 mg/L fluconazole, 5 mg/L voriconazole and 2 mg/L posaconazole or saline control was investigated. As negative control, the cytokine levels in whole blood without any stimuli (neither hyphal fragments nor antimycotics) was used, while the control with Aspergillus but no antimycotics is referred to as ‘aspergillosis control’. All samples were incubated at 37 °C over 4 h at a slow rotation rate imitating physiologic conditions.
Concentrations for antimycotics used were chosen at or marginally above the clinically achieved maximal serum concentration which were 1.7 mg/L for liposomal amphotericin B when administering 5.0 mg/kg/day [ 21], 18 mg/L for fluconazole at steady state after administration of 400 mg [ 22], 2–6 µg/L for voriconazole [ 23] and 1.3 µg/mL for posaconazole [ 24]. Concentration of conventional amphotericin B was chosen to be identical with liposomal amphotericin B to allow comparison of the gained data. Fluconazole was included in this study though it is lacking inhibiting potency against A. fumigatus for comparison reason as well as the fact that the anti-inflammatory potency of substances might be attractive independent from any concrete infection.
Anzeige

In this study levels of cytokines, IL-6, TNF-α and IL-8 were determined in plasma using commercially available Elisa kits (Quantikine ®, R&D Systems, Austria) according to the manufacturer’s instructions. The minimal detection limits were 0.7 ng/mL for IL-6, between 1.5 and 7.5 pg/mL for IL-8 and between 0.5 and 5.5 pg/mL for TNF-α. The minimal detectable dose for this Elisa kits had been previously determined by adding two standard deviations to the mean optical density value of 20 zero standard replicates and calculating the corresponding concentration. In this study, IL-6, IL-8 and TNF-α levels were quantified for all samples at the predefined time points. The results are expressed in pg/mL.

Data in the text are expressed as means ± standard deviation of experiments performed in duplicates. In the pilot, 7 subjects were included. In the main part, the whole blood from 10 subjects was assigned to experiments to determine the impact of amphotericin B and fluconazole, while the other 10 subjects were assigned to liposomal amphotericin B, posaconazole and voriconazole. Negative controls with saline solution as well as aspergillosis control adding solely hyphae but no antimycotic agents were performed for all 20 subjects in the main part. Time interleukin concentration profiles were performed using the means of 7 (pilot), 10 (main part) or 20 (main part controls) subjects and are depicted in Figs.  1 and 2. Mean cytokine concentrations after 4 h of incubation are compared in Fig.  3. Ratios were calculated by dividing the quantified cytokine concentration in the presence of an antimycotic by the quantified cytokine concentration in the Aspergillus control sample without antimycotic (aspergillosis control). As well as the ratios of cytokine concentrations after incubation without mold were calculated comparing cytokine values after incubation with antimycotics over zero control (cytokine levels after incubation of whole blood alone).
×
×
×

For the establishment of an aspergillosis model in human whole blood, the impact of high and low concentration of conidia as well as active or inactivated hyphae of Aspergillus fumigatus hyphae on IL-6 and TNF-α profiles was determined. Cytokine level profiles over 24 h are shown in Fig.  1.
Regarding the maximal cytokine levels, for both cytokines, inactivated hyphal fragments showed the greatest cytokine levels among all fungal stimuli and a substantially greater cytokine release than vital hyphae. In contrast, conidia had the smallest impact on cytokine release, with no relevant difference between the two conidia concentrations used. Maximal levels ( C max) were for both cytokine observed after 4 h. LPS led to an IL-6 increase and TNF-α increase comparable to inactivated hyphal fragments. In absolute numbers, the maximal reached IL-6 and TNF-α levels were 42.32 ± 31.56 pg/mL and 102.90 ± 148.57 pg/mL for inactive hyphal fragments, 4.65 ± 1.03 pg/mL and 15.80 ± 6.31 pg/mL for conidia, and 60.48 ± 1.32 pg/mL and 79.87 ± 71.84 pg/mL for LPS. While inactive hyphae thereby led up to a cytokine increase of 43-fold for IL-6 and 69-fold for TNF-α, conidia solely increased IL-6 and TNF-α levels 2- and 4-fold, respectively.
Anzeige

Open access funding provided by Medical University of Vienna. We thank for the financial support obtained by the ‘Hochschuljubiläumsfond’ of the City of Vienna.

The authors have no conflict of interest.
Open AccessThis article is distributed under the terms of the Creative Commons Attribution 4.0 International License ( http://​creativecommons.​org/​licenses/​by/​4.​0/​), which permits unrestricted use, distribution, and reproduction in any medium, provided you give appropriate credit to the original author(s) and the source, provide a link to the Creative Commons license, and indicate if changes were made. 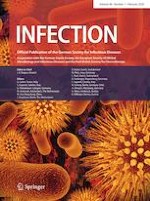 Antagonistic effect between tigecycline and meropenem: from bed to bench to bed

Food poisoning: an underestimated cause of Boerhaave syndrome

Correction to: HBV molecular epidemiology and clinical condition of immigrants living in Italy