Impact of ear protection on occurrence of exostosis in surfers: an observational prospective study of 242 ears | springermedizin.de Skip to main content
SUCHE MENÜ 1 2 3 4

The aim of the study was to investigate the efficacy of ear protection (earplug and surf hood) in preventing the development of external auditory exostosis (EAE) in surfers.

We performed a prospective observational study. Volunteer surfers were recruited from June 2016 to October 2017 on the Brittany coast in France. Each participant filled in a questionnaire and underwent otoscopic digitalized photography to establish the degree of external ear obstruction by two different practitioners. The correlation between the percentage of external ear obstruction and the time spent in water with or without protection was evaluated. Risk factors of EAE were assessed.

Wearing earplugs is an effective way to prevent EAE in surfers unlike surf hood.
Anzeige 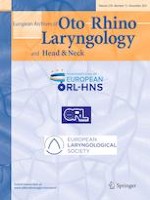 A systematic review of remote otological assessment using video-otoscopy over the past 10 years: reliability and applications

Primary neoplasms of the parapharyngeal space: diagnostic and therapeutic pearls and pitfalls

One stop neck lump clinic: a boon for quick diagnosis and early management