Impact of earlier HAART initiation on the immune status and clinical course of treated patients on the basis of cohort data of the German Competence Network for HIV/AIDS | springermedizin.de Skip to main content
TOOLBAR 1 2 3 4
SUCHE MENÜ 1 2 3 4

Hitherto, studies on highly active antiretroviral therapy (HAART) initiation have shown partly inconsistent results. Our study investigated the clinical course and course of immune status after HAART initiation at CD4-cell-count/μl of treated patients between 250 and 349 (group 1), compared to 350–449 (group 2), on the basis of the cohort of the Competence Network for HIV/AIDS (KompNet cohort).

Patients had to be HAART-naïve. Medication had to start at the earliest in 1996, being at least triple combination therapy. The primary endpoints of death, first AIDS-defining illness and first drop of CD4-cell-count/μl below 200 were evaluated as censored event times between the initiation of HAART (t 0) and the date of the first event/date of last observation. Probabilities of event-free intervals since t 0 were calculated by Kaplan–Meier estimation, compared by logrank tests. The results were adjusted for confounders using Cox regression. Additionally, incidences were estimated. 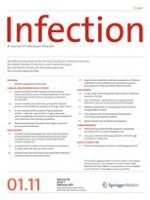 Is procalcitonin a marker of invasive bacterial infection in acute sickle-cell vaso-occlusive crisis?