In this retrospective study, 1185 consecutive patients who had undergone de novo pacemaker or ICD implantation during a 2-year period were included. All implantations in the first year were performed using the reference technology (Allura Xper), whereas in the second year, the new X-ray technology (AlluraClarity) was used. Radiation exposure, expressed as the dose area product (DAP), was compared between the two time periods to determine the radiation exposure reduction for pacemaker and ICD implantations without cardiac resynchronization therapy (CRT) and with CRT. Procedure duration and contrast volume were used as measures to compare complexity and image quality.

Introduction of new X-ray technology resulted in a radiation exposure reduction of more than 69 % for patients during pacemaker and ICD implantation while image quality was unaffected. 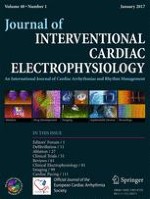 Remote magnetic navigation for ventricular ablation: did the machine win this round?

Long-term use of the wearable cardioverter-defibrillator: prolonging life or prolonging indecision?