We conducted this study to evaluate the impact of the postoperative mean arterial pressure (MAP) on surgical complications after hepatic resection.

The subjects of this study were 199 patients who underwent hepatic resection for primary liver malignancy between 2004 and 2013. A clinically relevant postoperative complication was defined as a Clavien–Dindo grade ≥ III complication.

A low MAP on POD 1 and/or 2 is an independent predictor of postoperative complications. 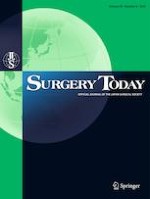 Validated nomogram for the prediction of disease-free survival after hepatectomy for hepatocellular carcinoma within the Milan criteria: individualizing a surveillance strategy