Influenza prophylaxis with oseltamivir is recommended for exposed high-risk patients. Patients with many comorbidities have an increased likelihood of co-administration of oseltamivir and warfarin. Evidence of a drug interaction is conflicting in the literature and is limited to a 5-day treatment course. This study evaluates the impact of prophylactic oseltamivir on international normalized ratio (INR) in patients taking warfarin. This retrospective cohort study conducted within the Veterans Health Administration included patients on warfarin who received oseltamivir for influenza prophylaxis. The primary endpoint was change in INR from baseline to day 10 of oseltamivir treatment. Secondary endpoints included change in INR based on renal function and duration of oseltamivir prophylaxis, trend in INR, and frequency of bleeding and thrombosis events. A total of 1041 patients were included and received oseltamivir for a mean of 12.9 days. The mean post-oseltamivir INR was significantly increased compared to the pre-oseltamivir INR (2.39 to 2.52; p < 0.001). Patients with a creatinine clearance of 31–60 mL/min had a significant increase in INR (2.40 to 2.59; p < 0.01). There was an increase in INR when oseltamivir was used for 7 or 8–10 days. Of included patients, 5.1% and 1.8% had a recorded thrombosis or bleeding event, respectively. There was a significant increase in INR in patients on chronic warfarin therapy and concomitant prophylactic oseltamivir, but this change may only be clinically significant for certain patient populations. The most impact on INR was within 7–10 days of oseltamivir initiation and in patients with impaired renal function. 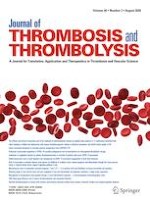 Benefits of short-term or prolonged as compared to standard 1 year DAPT in patients with acute coronary syndrome treated with drug-eluting stents: a meta-analysis of 9 randomized trials

Comparison of 2013 and 2009 versions of Caprini risk assessment models for predicting VTE in Chinese cancer patients: a retrospective study

The efficacy and safety of tranexamic acid in the treatment of intertrochanteric fracture: an updated meta-analysis of 11 randomized controlled trials