Morphological and functional anomalies of the urethra may cause stress urinary incontinence after radical hysterectomy (RH). We introduce a novel three-dimensional (3D) magnetic resonance imaging (MRI) technique to assess the impact of RH on the transobturator sling pathway.

3D-MRI reconstruction models were retrospectively developed for the measurement of various parameters before and after RH, including puncture angle, orientation and distance from the midurethral puncture site to the obturator membrane (DUO), in 31 patients with cervical cancer. Additionally, the correlations between DUO and body height and interspinal diameter were evaluated.

The sling procedure via the transobturator approach is technically safe from a 3D anatomical standpoint. However, wide variability in the anatomical parameters must be taken into account when planning the procedure. 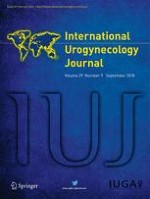 Method and reliability of measuring midurethral area and echogenicity, and changes during and after pregnancy

Use of an iPad™ application in preoperative counseling for pelvic reconstructive surgery: a randomized trial

Comparison of clean intermittent and transurethral indwelling catheterization for the treatment of overt urinary retention after vaginal delivery: a multicentre randomized controlled clinical trial