Impact of reconceptualization response shift on rating of quality of life over time among people with advanced cancer | springermedizin.de Skip to main content
TOOLBAR 1 2 3 4
SUCHE MENÜ 1 2 3 4

People with cancer may experience change in what constitutes quality of life (QOL) over time as a result of the cancer progression (true change) or adaptation to the experience, considered as a response shift phenomenon. As individualized measures are ideally suited to explore response shift, this study aimed to estimate the extent to which reconceptualization response shift occurred over time in a cancer population and the impact of this response shift on estimates of change on QOL measures.

Ninety-seven people with advanced cancer completed the study measures including the Patient-Generated Index (PGI) at diagnosis (T0) and 1 year later (T1). The response shift indicator was the change in the number of areas nominated (range − 4 to + 3). Multivariate linear regression was used to estimate the effect of changing areas on change in the PGI score, single indicators of global QOL, and the EQ-5Dindex adjusted for age and sex.

Approximately 72% of people in this sample either added or dropped areas over time. People who dropped more than two areas had higher PGI scores at T1 than T0 while people who added areas showed low PGI score.

The results are consistent with the PGI framework as areas nominated tend to focus on negative aspects of QOL.

Titel
Impact of reconceptualization response shift on rating of quality of life over time among people with advanced cancer
Autoren:
Ala’ S. Aburub
B. Gagnon
S. Ahmed
A. M. Rodríguez
Nancy E. Mayo 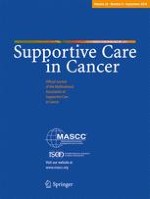 A randomized, open-label non-inferiority study to compare palonosetron and ondansetron for prevention of acute chemotherapy-induced vomiting in children with cancer receiving moderate or high emetogenic chemotherapy

Prospective study of shoulder strength, shoulder range of motion, and lymphedema in breast cancer patients from pre-surgery to 5 years after ALND or SLNB

Correction to: Can early palliative care with anticancer treatment improve overall survival and patient-related outcomes in advanced lung cancer patients? A review of the literature