Modalities of surveillance to detect recurrence after nephrectomy for localized or locally advanced renal tumor are not standardized. The aim was to assess the impact of surveillance scheme on oncological outcomes.

Patients treated for localized or locally advanced renal tumor with total or partial nephrectomy between 2006 and 2010 in an academic institution were included retrospectively. According to the University of California Los Angeles Integrated Staging System (UISS) protocol, follow-up was considered adequate or not. Symptoms, location and number of lesions at recurrence diagnosis were collected. Recurrence-free, cancer-specific and overall survivals were estimated using the Kaplan–Meier method and compared with the log-rank test. Cox proportional hazards regression models were calculated to identify prognostic factors.

A total of 267 patients were included. Median follow-up was 72 months. Recurrence rate was 23.2% (62/267 patients). Recurrences were local (16%), single metastatic (23%), oligo-metastatic (15%) or multi-metastatic (46%). 72.6% of the recurrences occurred within the 3 years after surgery. No recurrence was diagnosed by chest X-ray or abdominal ultrasound. One hundred and twenty-one patients had inadequate follow-up. They had similar recurrence-free survival, cancer-specific survival and overall survival as patients with adequate follow-up. In multivariable analysis, the presence of multi-metastatic lesions was an independent prognostic factor of worse cancer-specific mortality after recurrence diagnosis (HR = 10.15, 95% CI: 2.29–44.82, p = 0.002).

Role of chest X-ray and abdominal ultrasound for the detection of recurrences is limited. Rigorous follow-up according to the UISS protocol does not improve oncological outcomes. Follow-up schedules with less frequent imaging should be discussed. 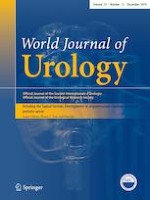 Pattern of metastatic deposit in recurrent prostate cancer: a whole-body MRI-based assessment of lesion distribution and effect of primary treatment

Comparison between cold knife and laser urethrotomy for urethral stricture: a systematic review and meta-analysis of comparative trials

Is there enough evidence to support sacral neuromodulation as a viable treatment option in children and adolescents with neurogenic lower urinary tract dysfunction?