The aim of the present study was to examine the frequency effects (20 Hz and 100 Hz) on neuromuscular fatigue using stimulation parameters favoring an indirect motor unit recruitment through the afferent pathway.

Nineteen subjects were divided into two groups: 20 Hz (n = 10) and 100 Hz (n = 9). The electrical stimulation session consisted of 25 stimulation trains (20 s ON/20 s OFF, pulse width: 1 ms) applied over the tibial nerve and delivered at an intensity evoking 10% maximal voluntary isometric contraction (MVIC). Before and after these protocols, MVIC was assessed, while neural changes were evaluated by the level of activation (VAL) and muscle changes were evaluated by the twitch associated with the maximal M-wave (Pt). For all stimulation trains, the real and the theoretical values of the torque-time integral (TTIr and TTIth, respectively) were calculated. The TTIr/TTIth ratio of the first train was calculated to evaluate the presence of extra torque.

The main results showed a similar decrease in MVIC torque after both protocols accompanied by neural and muscle changes, as evidenced by the decrease in VAL and Pt. TTIr values across the 20-Hz trains remained constant, whereas they significantly decreased during the 100-Hz stimulation trains. The relative MVIC decrease was negatively correlated with TTIr/TTIth.

Results give evidence of an identical neuromuscular fatigue development between protocols, while lower stimulation frequency permitted preservation of a given torque level during the stimulation trains. The negative correlation between this fatigue development and TTIr/TTIth suggests that extra torque production induces greater voluntary torque losses. 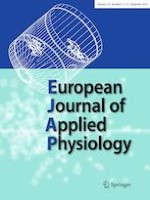 Perfluorocarbons for the treatment of decompression illness: how to bridge the gap between theory and practice

The heart rate method for estimating oxygen uptake: analyses of reproducibility using a range of heart rates from commuter walking

Effectiveness of combining microcurrent with resistance training in trained males