We assessed the impact of type of tooth on the outcome of root canal treatment (RCT) according to factors potentially weakening the prognosis such as preoperative apical periodontitis (AP) and treatment modality (primary or secondary RCT).

Apart from existing AP and retreatment scenario, also, the type of tooth and gender had a significant influence on the outcome of RCT in this study.

The prognosis of RCT varies by type of tooth; special attention should be given to RCT of molar teeth. 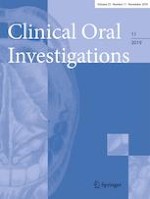 The interactions of dendritic cells with osteoblasts on titanium surfaces: an in vitro investigation

Dental treatment under general anesthesia in adults with special needs at the University Hospital of Dental Prosthetics and Restorative Dentistry of Innsbruck, Austria: a retrospective study of 12 years