Poker has gained tremendous popularity in recent years, increasing the risk for some individuals to develop pathological gambling. Here, we investigated cognitive biases in a computerized two-player poker task against a fictive opponent, among 12 pathological gambling poker players (PGP), 10 experienced poker players (ExP), and 11 inexperienced poker players (InP). Players were compared on probability estimation and decision-making with the hypothesis that ExP would have significantly lower cognitive biases than PGP and InP, and that the groups could be differentiated based on their cognitive bias styles. The results showed that ExP had a significantly lower average error margin in probability estimation than PGP and InP, and that PGP played hands with lower winning probability than ExP. Binomial logistic regression showed perfect differentiation (100%) between ExP and PGP, and 90.5% classification accuracy between ExP and InP. Multinomial logistic regression showed an overall classification accuracy of 23 out of 33 (69.7%) between the three groups. The classification accuracy of ExP was higher than that of PGP and InP due to the similarities in probability estimation and decision-making between PGP and InP. These impairments in probability estimation and decision-making of PGP may have implications for assessment and treatment of cognitive biases in pathological gambling poker players. 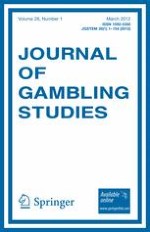 Gambling in Western and Eastern Europe: The Example of Hungary

Can We Perceive Near Miss? An Empirical Study