Approximately one quarter of all admissions in an acute care hospital are related to adverse drug events [ 1, 2]. Transition of care events such as admission, transfer within the hospital, and discharge from the hospital contribute greatly to adverse drug events that are associated with prolonged hospital stay, added costs, and increased mortality [ 3, 4]. Often, adverse drug events are the result of medication discrepancies, that are unintended documentation errors at transition of care [ 4].
Anzeige
An initial source of potential medication errors lies within the proper acquisition of the patient’s medication history [ 5, 6]. A systematic review of 22 studies uncovered that between 10 and 67% of patients had at least one medication discrepancy at hospital admission [ 7]. In 6 of these studies, up to 59% of the found discrepancies were considered to be clinically important [ 7]. The most common error in the medication history was the omission of a regularly taken medication [ 5, 6, 8, 9].
The inaccurate or incomplete recording of the medication history at admission can lead to consequences such as interrupted or inappropriate drug therapies, duplications, or unforeseen drug interactions with an increased risk for drug-related problems that may not only persist during hospital stay but continue after discharge [ 3, 6, 10, 11].
Medication reconciliation interventions were previously shown to reduce discrepancies in the medication history that may lead to complications and subsequently prolonged hospital stays [ 12– 14].

The aim of the study was to reduce the proportion of patients with at least one medication discrepancy in the medication history at hospital admission by implementing an in-house developed electronic checklist.
Anzeige

The study was approved by the National Swiss Ethics Committee on research involving humans (#2016-00939).

The prospective study was conducted in a ward with 26 beds focusing on vascular and visceral surgery at the Kantonsspital Aarau, a Swiss cantonal hospital. To support physicians in obtaining accurate and complete medication histories of patients at admission, a multidisciplinary team of pharmacists, physicians and nurses developed a checklist in the electronic prescribing system (EPS) to provide a framework and guide during the acquisition of the necessary information (Fig.  1).
×
Admitted patients were enrolled during the two phases of the study. Phase 1, before the introduction of the checklist, lasted from November 2013 to January 2014. The effect of the checklist on medication history accuracy was examined during phase 2, which lasted from February 2015 to May 2015. Before implementing the change to using the checklist, all involved surgeons had to attend a mandatory seminar on how to use the new tool.
During both phases, the medication history for each patient was acquired by a physician and compared to that prepared by the same pharmacist (gold-standard). All identified medicines were documented according to the ATC code system. Each divergence was considered a medication discrepancy and categorized in six groups:
The medication management of the patients prior to admission was categorized in five groups:
Patient admission was subdivided into three groups:

All admitted patients (≥ 16 years), who were transferred to the surgical ward, were included.
Patients, who were discharged from hospital within 48 h or had been moved to another ward, before the pharmacist could obtain the medication history, were all excluded from the study. Likewise, patients, who were admitted for same day surgery in phase 2 or with communication problems and without a family member to be interviewed, were not included in the study.
Anzeige

Before starting to collect data, a power analysis was conducted using the software R-2.15.2 (2012-10-26, Trick or Treat). Using a Poisson regression (α = 0.05 and β = 0.05) and assuming the intervention would reduce the proportion of patients with at least one medication discrepancy by 50%, a minimum enrollment of 110 patients per phase was needed. Microsoft Excel 2010 and R-3.1.3 (2015-03-09, Smooth Sidewalk) were used for the descriptive and statistical analysis. Significance level for adjusted p values was set to 0.05. In order to check whether the patient group in phase 1 differed from phase 2 univariate tests were performed. Exact Fisher’s tests were used for nominal variables, while Welch t-tests were performed for continuous variables. Potential differences between medication discrepancies in the two phases were assessed using an Exact Fisher’s test. P values were corrected for multiple testing using the method of Benjamini and Hochberg. Exact Fisher’s tests were further used to calculate the odds ratios (OR) for using the checklist and obtaining a systematic medication history. Influence of other factors was analyzed using logistic regression. The suitability of the model was assed using graphical diagnostics of the fit and distributional assumptions.

228 of 415 patients admitted to the ward during the two phases were included in this study. 113 were included in phase 1 before intervention and 115 in phase 2 after intervention. 187 patients were excluded for the following reasons: 125 were discharged within less than 48 h, 39 were admitted for same day surgery during phase 2, 15 moved to another ward before a pharmaceutical interview could be conducted, 7 due to communication issues, and 1 for refusing to be interviewed.
The characteristics of the patients during phase 1 and phase 2 are shown in Table  1. 86% were admitted during daytime (93.8% in phase 1, 78.3% in phase 2) and 60.1% (54.0 and 66.1%, respectively) due to emergencies (N). While 14.2% were admitted for same day surgery (SDS) in phase 1, no SDS admissions were included in phase 2. The largest groups underwent vascular surgery (47.4%) or visceral surgery (37.3%). There were slightly more men than women in phase 1 (58%) and substantially more in phase 2 (85%). There were similar types of care services used by the patients recruited during phase 1 and 2.
Table 1
Characteristics of the patient populations in phase 1 and phase 2
The numbers (n) and the percentage (%) of the included patients for each category are shown. Type of admission: (E) elective, (N) emergency, (SDS) same day surgery. Type of surgeries: (g) vascular, (v) visceral, (tr) trauma, (tx) thoracic, (a) unspecified surgeries. Type of care service: (A) at home without care service support, (B1) at home with nursing support, (B2) at home with family member support, (B3) at home with pharmacist support, (I) at nursing home
Anzeige
The descriptive summary of continuous variables is summarized in Table  2. The median age of the patients in both phases was 67 years (IQR 52-78). The median number of regularly used medication was 5 (IQR 2-10), and the number of discrepancies in the medication history was reduced from a maximum of 14 down to 8 after intervention ( p < 0.0001). All other variables showed no difference.
Table 2
Descriptive summary of the continuous variables in the data
For each variable the number of observations (n), the minimum (Min), the first quartile (q1), the median ( \(\tilde{x}\)), the mean ( \(\bar{x}\)), the third quartile (q3), the maximum (Max), the standard deviation (s) and the inter-quartile range (IQR) are given. For missing data see column #NA (not available)
Out of 735 medications checked before intervention, 259 (35.2%) contained discrepancies (Fig.  2). 69.9% of the patients had at least one medication discrepancy. The most common discrepancy in phase 1 was omission of a regularly used medication (76.4%) followed by the commission of a medication (6.6%). After intervention, the discrepancies were dramatically reduced to 68 out of 677 checked medications (10%) with a significant decrease in medication omissions down to 44.1% ( p < 0.001) and commission to 4.4% ( p < 0.01). Only 29.6% of patients had at least one discrepancy after intervention ( p < 0.0001), and the rate per patient decreased from 2.3 to 0.6 (Table  2). With the IT-guided checklist the odds ratio of having a medication discrepancy was 4.9 times lower (OR 4.9, 95% confidence interval 3.6–6.6).
×
The most common discrepancy in both phases was omission of a medication. In phase 1, the most discrepancies occurred in the group of analgesics (ATC code N02) at 17.2% leading ophthalmologicals (S01) at 7.6% and mineral supplements (A12) at 7.1%. After the implementation of the IT-guided checklist, the medication discrepancies for analgesics were reduced from 34 to 4, for ophthalmologicals from 15 to 8 and for mineral supplements from 14 to 1.
Using logistic regression, various factors were examined for their influence on the OR (Table  3). There were two significant parameters. On one hand, the odds for a medication discrepancy were reduced by 74% by using the checklist. On the other hand, there was a 1.7% decrease in the odds of having a medication discrepancy for each additional year of age ( p = 0.015).
Table 3
Multiple logistic regression analysis of potentially influential factors
Significance level for adjusted p values was set to 0.05
The reference parameters for the Intercept are the male gender, elective admission, daytime admission, unspecified surgeries and at home without care service
Anzeige
Age was compared to the type of care service to see if there is an association between these two factors. The combination showed a slight trend but no statistical significance.

The authors thank the participating physicians and nurses for their active effort. The authors also thank Adin Ross-Gillespie for his input on the logistic regression model.

The authors declare that they have no conflicts of interest.
Open AccessThis article is distributed under the terms of the Creative Commons Attribution 4.0 International License ( http://​creativecommons.​org/​licenses/​by/​4.​0/​), which permits unrestricted use, distribution, and reproduction in any medium, provided you give appropriate credit to the original author(s) and the source, provide a link to the Creative Commons license, and indicate if changes were made. 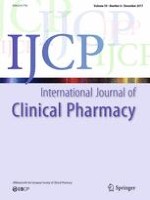 Quality of medication information in discharge summaries from hospitals: an audit of electronic patient records