Although mixed sleep apnea (MSA) is one of the three types of sleep apnea, it is not considered a separate disease entity. It is generally seen as a part of obstructive sleep apnea-hypopnea syndrome (OSAHS), but its implications are often ignored. In this study, we examined its features and the potential impact on OSAHS patients.

Subjects diagnosed with OSAHS by polysomnography (PSG) were enrolled. All participants underwent physical checkups and tests of blood biochemistry. They were anthropometrically, clinically, and polysomnographically studied.

MSA events were common in patients with severe OSAHS patients. There were significant differences between the pure OSAHS group and its mixed counterpart in apnea-hypopnea indices during REM (AHIREM) and non-REM (AHINREM) and in percentages of N2 or N3 sleep. Logistic regression analysis showed that, after adjustment of other parameters, patients with MSA events were mostly male, had higher body mass index (BMI), higher scores on Epworth Sleepiness Scales (ESS), higher triglyceride (TG) levels, and higher apnea-hypopnea index (AHI). The combined predictive probability of the aforementioned variables was 0.766 (95% CI = 0.725~0.806; sensitivity 61.6%, specificity 82.1%).

Our study suggested that MSA was related to the stability of the ventilatory control in OSAHS patients. MSA events occur more frequently in patients with severe OSAHS, and male gender, obesity, daytime sleepiness, and elevated TG levels were risk factors for the mixed OSAHS. 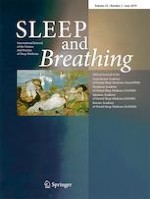