In children, the prescribed ultrafiltration needed to achieve the fixed end session dry weight can induce hypotensive episodes. A variety of on-line devices based on the direct measurement of the hematocrit are available, but these devices nearly always only measure the quantitative variation in the blood volume as the means of identifying a hypotensive occurrence risk. In February 2002, our unit began using an on-line hematocrit measurement available even with infants’ blood lines. Since January 2004, this blood volume monitor (BVM) has been used routinely in all dialysis sessions, and 2240 BVM data sets have been recorded and analysed during the last 4 years. Based on our analysis of these data sets, we have determined that, in addition to the described threshold points, which provide a quantitative analysis of the BVM, the qualitative analysis of the BVM, the so-called curve shape, is also of clinical importance. In 91% of the sessions analysed, a very similar “symptom-free” curve shape was noted that consisted of an initial decrease, followed by the BV reaching a “stable” plateau. Additional curve shapes were identified: one with no BV decrease, presumably indicating an overload risk state, and one with a continuous BV decrease, presumably indicating an hypovolemic risk state. In our experience, only 2% of the patients had relevant clinical symptoms that were not visible by BVM. 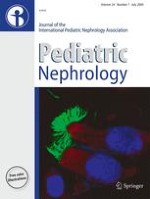 Insulin-like growth factor-I and bone: lessons from mice and men

Targeting the B cell in vasculitis

Obesity and preterm birth: additive risks in the progression of kidney disease in children