Compared to classical chemotherapy, peptide-based drug targeting is a promising therapeutic approach for cancer, which can provide increased selectivity and decreased side effects to anticancer drugs. Among various homing devices, gonadotropin-releasing hormone-III (GnRH-III) peptide represents a suitable targeting moiety, in particular in the treatment of hormone independent tumors that highly express GnRH receptors (e.g. colon carcinoma). We have previously shown that GnRH-III[4Lys(Ac),8Lys(Dau = Aoa)] bioconjugate, in which daunorubicin was attached via oxime linkage to the 8Lys of a GnRH-III derivative, exerted significant in vivo antitumor effect on subcutaneously developed HT-29 colon tumor. In contrast, results of the study reported here indicated that this compound was not active on an orthotopically developed tumor. However, if Lys in position 4 was acylated with butyric acid instead of acetic acid, the resulting bioconjugate GnRH-III[4Lys(Bu),8Lys(Dau = Aoa)] had significant tumor growth inhibitory effect. Furthermore, it prevented tumor neovascularization, without detectable side effects. Nevertheless, the development of metastases could not be inhibited by the bioconjugate; therefore, its application in combination with a metastasis preventive agent might be necessary in order to achieve complete tumor remission. In spite of this result, the treatment with GnRH-III[4Lys(Bu),8Lys(Dau = Aoa)] bioconjugate proved to have significant benefits over the administration of free daunorubicin, which was used at the maximum tolerated dose. 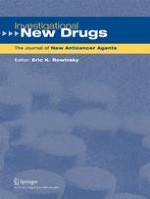 A Phase I study of olaparib and irinotecan in patients with colorectal cancer: Canadian Cancer Trials Group IND 187

Why balls are not put inside the basket? A reflection on testicular cancer clinical trial design