Rats were anesthetized, intubated and ventilated, and randomly assigned to RIPC, induced by inflating bilateral pressure cuffs around the femoral arteries to 200 mmHg for 5 min, followed by 5-min release of the cuffs (repeated for 4 cycles), or control group (cuffs were inflated to 30 mmHg). Hemorrhagic shock was induced by withdrawing blood to a fixed mean blood pressure of 30 mmHg for 30 min, followed by 30 min of resuscitation with shed blood. Rats remained anesthetized for 1 h during which hemodynamics were monitored then they were allowed to survive for 6 weeks.

The percentage of estimated total blood volume withdrawn to maintain a level of 30 mmHg was similar in both groups. RIPC significantly increased survival at 6 weeks: 5 of 27 (19%) rats in the control group and 13 of 26 (50%; p = 0.02) rats in the RIPC group survived. Blood pressure was higher in the RIPC group. The diastolic internal dimension of the left ventricle, an indicator of circulating intravascular blood volume, was significantly larger in the RIPC group at 1 h after initiation of resuscitation compared to the control group (p = 0.04). Left ventricular function assessed by fractional shortening was comparable in both groups at 1 h after initiation of resuscitation. Blood urea nitrogen (BUN) was within normal range in the RIPC group (17.3 ± 1.2 mg/dl) but elevated in the control group (22.0 ± 1.7 mg/dl) at 48 h after shock.

RIPC significantly improved short-term survival in rats that were subjected to hemorrhagic shock, and this benefit was maintained long term. RIPC led to greater circulating intravascular blood volume in the early phase of resuscitation and improved BUN. 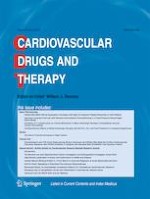 Cardioprotective Effects of Beta3-Adrenergic Receptor (β3-AR) Pre-, Per-, and Post-treatment in Ischemia–Reperfusion

High-Density Lipoprotein Function and Dysfunction in Health and Disease