The objectives of this work were to investigate the activity of dietary flavonol congeners against cell lines derived from human solid tumours and to examine whether the in vitro activity was associated with specific structural feature(s) of the molecules.

Antiproliferative activity of the flavonol congeners was investigated against eight different human cancer cell lines representing different types of human solid tumour, using the sulforhodamine B (SRB) assay in accordance with the instructions published by the NCI. Cell cycle perturbations caused by the congeners were monitored by flow-cytometric analysis of DNA stained with propidium iodide.

Most of the flavonols examined had weak antiproliferative and cytotoxic activity. Of all the flavonol congeners tested peracetylated tiliroside found to be the most powerful, with significant antiproliferative and cytotoxic activity. Most flavonols induced similar cell cycle perturbations, whereas induction of apoptosis was significant only for cells treated with peracetylated tiliroside.

These findings indicated that the –OH groups of aromatic ring B were not linked to the cytotoxic and antiproliferative activity of the tested flavonols whereas peracetylation of the glycosides resulted in moderate improvement. In contrast, acetylation of tiliroside esterified with coumaric acid at position 5 of the sugar moiety greatly improved the activity of this congener. Overall, the results of this study suggest a critical role of sugar moiety substituents in the anticancer activity of the flavonols. 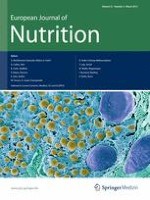 Identification of change-points in the relationship between food groups in the mediterranean diet and overall mortality: an ‘a posteriori’ approach