Using a 200 W generator, thirty ablation zones were created and divided into three groups of 10 each as follows: group A, RFA alone with 16 gauge monopolar internally cooled (IC) electrode; group B, cisplatin-infused RFA with 16 gauge ICP electrode; and group C, normal saline-infused RFA with 16 gauge ICP electrode. Radiofrequency was applied to the explanted bovine liver for 12 min. During RFA, cisplatin and normal saline were injected into tissue at a rate of 0.5 mL/min through the ICP electrode by injection pump. Dimensions of the ablation zone and technical parameters were compared between the three groups. 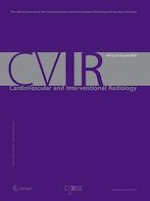 Stent-Retriever Thrombectomy and Rescue Treatment of M1 Occlusions Due to Underlying Intracranial Atherosclerotic Stenosis: Cohort Analysis and Review of the Literature

Prophylactic Occlusion Balloon Placement in the Abdominal Aorta Combined with Uterine or Ovarian Artery Embolization for the Prevention of Cesarean Hysterectomy Due to Placenta Accreta: A Retrospective Study