In vitro progesterone production by luteinized human mural granulosa cells is modulated by activation of AMPK and cause of infertility | springermedizin.de Skip to main content
TOOLBAR 1 2 3 4
SUCHE MENÜ 1 2 3 4

Two distinct populations of granulosa cells exist within the ovulatory follicle, the mural granulosa cells that line the follicle and the cumulus granulosa cells that surround the oocyte. After ovulation, mural granulosa cells remain in the follicle while cumulus granulosa cells are expelled from the follicle with the oocyte [ 19]. The mural granulosa cells that remain in the ovulatory follicle lose their ability to proliferate and to produce estradiol. Under the influence of the LH surge which induced the ovulation, the mural cells undergo an epithelial-mesenchymal transition that leads to the formation of the large luteal cells (LLC) of the corpus luteum [CL], which secrete high amounts of progesterone [P4] [ 6]. In the presence of human chorionic gonadotropin [hCG] from a conceptus, the CL is rescued from luteolysis and maintains its production of P4, which is essential for the maintenance of pregnancy. Insufficient luteal rescue may lead to decreased P4 production that can lead to pregnancy loss. Luteal insufficiency has been estimated to be as high as 28% in couples with recurrent pregnancy loss [ 14, 15]. A better understanding of insufficient luteal rescue could improve the clinical diagnosis and treatment of early pregnancy loss.
In multiple species, sufficient energy is required for P4 production [ 23, 24]. Adenosine monophosphate activated protein kinase [AMPK] is a key regulatory protein for energy balance, and activation of AMPK results in a shift from anabolic to catabolic processes [ 11]. In rat granulosa cells, P4 was directly inhibited by AMPK activation [ 25]. Various subunits of AMPK have also been identified in the granulosa cells of small and large bovine follicles [ 23]. 5-Aminoimidazole-4-carboxamide-1-β-4-ribofuranoside [AICAR] is a well-established, cell-permeable agent, which both directly activates AMPK alloterically and promotes phosphorylation of AMPK [ 7]. Treatment with AICAR (7.5 mM) significantly decreased basal P4 production in bovine CL in vitro [ 4]. In contrast, dorsomorphin dihydrochloride (DM) is a potent, selective, cell-permeable and reversible AMPK inhibitor [ 17]. Treatment with DM inhibited AMPK activation induced by AICAR [ 22] or metformin [ 12].
Anzeige
The objectives of this project were to investigate the role of AMPK, a known intracellular mediator of energy balance, and a patient’s primary cause of infertility on the production of P4 in luteinized human granulosa cells.

Mural and cumulus granulosa cells from patients ( n = 26) undergoing egg retrieval after ovarian stimulation for in vitro fertilization [IVF] were provided by the WVU Center for Reproductive Medicine in Morgantown from April to December 2012. The age, BMI and primary cause of infertility were random as all patients with granulosa cells collected at oocyte retrieval were included in the study. Primary cause of infertility was assigned based on severity of the problem contributing most to preventing a successful pregnancy for each patient, with preference given to any issues with the female. Any endocrine related factor, such as endometriosis, was prioritized as the primary cause of infertility over any anatomical factor, such as tubal blockage, because these types of endocrine conditions were more likely to affect the granulosa cells collected for experiments. Patients were designated as male factor patients if there were no indications of female infertility and the male partner presented with an abnormal semen evaluation.
Daily or twice-daily injections of recombinant follicle stimulating hormone [FSH] began on d2 or d3 of the cycle and continued until ovulation was induced with hCG. One of the following preparations of FSH was used: Bravelle (Ferring Pharmaceuticals, Parsippany, NJ), Gonal F (EMD Serono, Rockland, MD), or Follistim (Merck, Whitehouse Station, NJ) in addition to Menopur (Ferring Pharmaceuticals Inc. Parsippany, NJ), which was used for every patient. Patients returned at least every other day for sonographic and hormonal monitoring of follicular growth beginning four days after initiation of stimulation. To prevent premature ovulation, gonadotropin releasing hormones [GnRH] antagonist injections (Ganirelix, Merck, Kenilworth, NJ) began when follicles reached at least 14 mm in diameter. Ovulation was induced with hCG injection (10,000 IU; Novarel, Ferring Pharmaceuticals, Parsippany, NJ) when at least two follicles were ≥18 mm in diameter, followed by oocyte collection 34 h later.

Sheets of mural granulosa cells were distinguished by anatomical structure and manually separated from cumulus granulosa cells by experienced embryologists following oocyte retrieval. Isolated mural sheets from each patient in G-MOPS Plus media (Vitrolife, Göteborg, Sweden) were centrifuged at 10,000 rpm for 5 min at room temperature. Supernatant was discarded, and the pellet was re-suspended in 500 μl of DMEM/F12 (Invitrogen, Grand Island, NY) with 20% ( v/v) fetal bovine serum, insulin/transferrin/selenium B (1000; 555; 0.67 mg/L respectively; Gibco, Grand Island, NY), gentamicin/amphotericin (10 μg/ml-0.25 μg/ml; Gibco, Grand Island, NY), and penicillin/streptomyocin (100 I.U./ml, 100 μg/ml; Life Technologies, Grand Island, NY). Viable cell number was determined using trypan blue dye exclusion (Gibco, Grand Island, NY) and a hemocytometer. All patients had cell viability >90% and cells were plated at 10,000 cells per well in 96-well flat bottom culture plates with 300 μl DMEM/F12 media (NUNC, Scientific Laboratory Supplies, Wilford, Nottingham, UK) at 37 °C and 5% CO 2 in a humidified incubator to permit luteinization and cell attachment. Media was changed every 24 h whereby 150 μl of spent media was replaced with fresh DMEM/F12 plus serum. Peak progesterone levels in human mural granulosa cells have been shown to occur on day 4 of culture [ 1], as was the case during preliminary testing of our culture conditions of days of luteinization ranging from 1 to 7 (data not shown), and therefore used as the experimental day. Four days after collection, cells were transferred to serum free DMEM/F12 media, and treatments were administered. Every treatment was tested in triplicate for each patient and media pooled for P4 by radioimmunoassay [RIA] as previously described [ 20]. Control values for each patient were obtained by culturing cells in triplicate with no hormones. This basal progesterone production, which was obtained on the same day as treatments, was used as a baseline for each patient, and treatments with pharmacological agents or hormones were compared to baseline within patient.
Anzeige

Treatments were based on previous studies in bovine luteal steroidogenic cells [ 3] and mural granulosa cells. The medium for the control group contained 0.1% dimethylsufoxide (DMSO, Pierce Rockport, IL), the solvent used for DM and AICAR. Mural granulosa cells isolated from patients presenting with tubal or male factor infertility were used in experiment 1 to control for any confounding female endocrine effect. Mural granulosa cells were treated with DM (109, 10.9, 1.09, 0.109 μm/L, Tocris, Bristol, UK) or AICAR (7.5, 0.75, 0.075, 0.0075 mM, Tocris, Bristol, UK) to evaluate the roles of inhibiting or stimulating AMPK, respectively, in luteinized mural granulosa cell production of P4. Cells were cultured for 24 h and medium was removed and frozen at −20 °C until assayed for P4.

In summary, understanding how drugs such as AICAR, DM, and other AMPK activators alter steroidogenic pathways in ovarian cells could lead to alternative or novel infertility treatments. Human mural granulosa cells serve as a valuable model for understanding how AMPK and its downstream targets affect P4 production in steroidogenic cells. Additionally, when stimulated with hCG, P4 production by mural granulosa cells differed among main infertility type, age, BMI, and pregnancy outcome. Investigating differences in basal and stimulated P4 concentrations amongst such patients may also give insight into luteal steroidogenesis in an infertile population. In addition to basal and stimulated P4 production, mRNA and protein levels of key enzymes such as P450scc, StAR, and 3βHSD should be evaluated across age, BMI, pregnancy outcome, and infertility type. Critically evaluating similarities and differences in granulosa cell P4 production between the previously mentioned factors has the potential to increase successful full-term gestations in patients undergoing IVF, and decrease the incidence of miscarriages induced by luteal insufficiency.

The authors would like to thank Dr. Ida Holásková for her assistance with the statistical analysis, and are grateful to Dr. Bob Dailey and Dr. Stan Hileman for their comments on the manuscript.

Supported by Agriculture and Food Research Initiative Competitive Grant no. 2010–65,203-20,660 from USDA National Institute of Food and Agriculture to J. F. and the West Virginia Agricultural and Forestry Experiment Station (Hatch 476, NE 1227). E. B. was supported in part by the Jerry R. Brooks fellowship in reproductive physiology.

All datasets on which the conclusions of the paper rely are available to readers in the Additional file 1.

Granulosa cells were collected during routine oocyte collection procedures by two experienced embryologist (M.C. and M.V.) at the WVU Center for Reproductive Medicine. Cells were then picked up by the experimenters (E.B. and J.F.) and taken back to the Department of Biology laboratory where the experiments described were performed. Due to the fact that the experimenters were utilizing otherwise discarded materials, had no direct contact with the patient, and were not privy to any identifying information for each patient, this project was declared to be exempt by the Institutional Review Board (IRB) at West Virginia University. 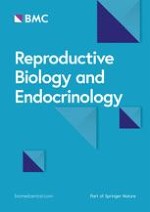