Since 2000, Fédération Dentaire Internationale has advocated for “minimal intervention” dental treatments. The dental field has demanded less-invasive caries treatment methods. However, recent caries treatments using a microsecond-pulsed free-running Er:YAG laser with a pulse duration of 200–300 μs have issues with non-selectivity for caries due to the thermal effect caused by the laser. To improve the selectivity by reducing the thermal effect, the ablation characteristics of a nanosecond-pulsed Er:YAG laser are investigated. 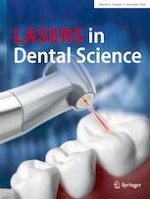 Effectiveness of photobiomodulation in cancer patients with oral mucositis