The ability to dissociate axonal density in vivo from other microstructural properties is important for the diagnosis and treatment of neurologic disease, and new methods to do so are being developed. We investigated one such method—restricted diffusion imaging (RDI)—to see whether it can more accurately replicate histological axonal density patterns in the corpus callosum (CC) of adults and children compared to diffusion tensor imaging (DTI), neurite orientation dispersion and density imaging (NODDI), and generalized q-sampling imaging (GQI) methods. To do so, we compared known axonal density patterns defined by histology to diffusion-weighted imaging (DWI) scans of 840 healthy 20- to 40-year-old adults, and to DWI scans of 129 typically developing 7-month-old to 18-year-old children and adolescents. Contrast analyses were used to compare pattern similarities between the in vivo metric and previously published histological density models. We found that RDI was effective at mapping axonal density of small (Cohen’s d = 2.60) and large fiber sizes (Cohen’s d = 2.84) in adults. The same pattern was observed in the developing sample (Cohen’s d = 3.09 and 3.78, respectively). Other metrics, notably NODDI’s intracellular volume fraction in adults and GQI generalized fractional anisotropy in children, were also sensitive metrics. In conclusion, the study showed that the novel RDI metric is sensitive to density of small and large axons in adults and children, with both single- and multi-shell acquisition DWI data. Its effectiveness and availability to be used on standard as well as advanced DWI acquisitions makes it a promising method in clinical settings.
Anzeige 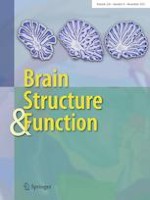 The connections of neocortical pyramidal cells can implement the learning of new categories, attractor memory, and top–down recall and attention

Cocaine- and amphetamine-regulated transcript peptide- and dopamine-containing systems interact in the ventral tegmental area of the zebra finch, Taeniopygia guttata, during dynamic changes in energy status

Structural connectivity and subcellular changes after antidepressant doses of ketamine and Ro 25-6981 in the rat: an MRI and immuno-labeling study