Incidence of hip fracture in Brazil and the development of a FRAX model | springermedizin.de Skip to main content
TOOLBAR 1 2 3 4
SUCHE MENÜ 1 2 3 4

The Brazilian FRAX model is described and used to determine intervention thresholds for the treatment of osteoporosis.

A FRAX model for Brazil was released May 1, 2013. This paper describes the data used to develop the Brazilian FRAX® model, illustrates its features and develops intervention thresholds.

Age- and sex-stratified hip fracture incidence rates were extracted from four regional estimates from the age of 40 years. For other major fractures, Brazilian incidence rates were estimated using Swedish ratios for hip to other major osteoporotic fracture (humerus, forearm or clinical vertebral fractures). Assessment and intervention thresholds were determined using the approach recommended by the National Osteoporosis Guideline Group (UK) applied to the Brazilian FRAX model.

Fracture incidence rates increased with increasing age: for hip fracture, incidence rates were higher amongst younger men than women but with a female preponderance from the age of 50 years. Ten-year probability of hip or major fracture was increased in patients with a clinical risk factor, lower BMI, female gender, a higher age and a decreased BMD T-score. Of the clinical risk factors, prior fracture accounted for the greatest increase in 10-year fracture probability at younger ages while a parental hip fracture history was the strongest risk factor at ages 80–90 years. Age-dependent probability-based intervention thresholds were developed equivalent to women with a prior fragility fracture.

The FRAX tool is the first to provide a country-specific fracture prediction model for Brazil. It is based on the original FRAX methodology, which has been externally validated in several independent cohorts. Despite some limitations, the strengths make the Brazilian FRAX tool a good candidate for implementation into clinical practice. 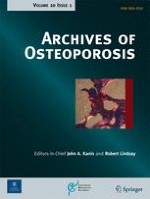 Erratum to: Milk fortified with vitamin D could reduce the prevalence of vitamin D deficiency among Japanese female college students

Age-related fragility fracture: insights from the natural homeostatic system in the skeleton

Bone mineral density screening and its accordance with Canadian clinical practice guidelines from 2000–2013: an unchanging landscape in Saskatchewan, Canada

Osteoporosis management and the utilization of FRAX®: a survey amongst health care professionals of the Asia-Pacific—response to comments by Lee and Ha