Severe combined immunodeficiencies (SCID) are a heterogeneous group of fatal genetic disorders, in which the immune response is severely impaired. SCID can be cured if diagnosed early. We aim to determine the incidence of clinically defined SCID cases, acquire data of reported cases and evaluate their possible prediction by newborn screening, before introduction of a general screening program in Germany.

The German Surveillance Unit for rare Paediatric Diseases (ESPED) prospectively queried the number of incident SCID cases in all German paediatric hospitals in 2014 and 2015. Inclusion criteria were (1) opportunistic or severe infections or clinical features associated with SCID (failure to thrive, lacking thymus or lymphatic tissue, dysregulation of the immune system, graft versus host reaction caused by maternal T cells), (2) dysfunctional T cell immunity or proof of maternal T cells and (3) exclusion of a secondary immunodeficiency such as human immunodeficiency virus (HIV) infection. In a capture-recapture analysis, cases were matched with cases reported to the European Society for Immunodeficiencies (ESID).

Fifty-eight patients were initially reported to ESPED, 24 reports could be confirmed as SCID, 21 patients were less than 1 year old at time of diagnosis. One SCID case was reported to ESID only. The estimated incidence of SCID in Germany is 1.6/100,000 (1:62,500) per year in children less than 1 year of age. Most patients reported were symptomatic and mortality in regard to reported outcome was high (29% (6/22)). The majority of incident SCID cases were considered to be probably detectable by newborn screening.

SCID is a rare disease with significant mortality. Newborn screening may give the opportunity to improve the prognosis in a significant number of children with SCID.
Anzeige 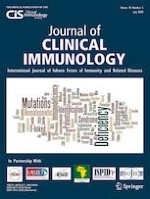 The Konya Declaration for Patients with Primary Immunodeficiencies

Haploinsufficiency of A20 Due to Novel Mutations in TNFAIP3

An Update on XMEN Disease