Sialolithiasis is a frequent disorder affecting the salivary glands. The incidence rate (IR) has been reported to be 2.9–5.5 per 100,000 person-years, but all previous studies have been based on selected hospital data. In this study, we conducted a population-based study evaluating the IR of sialolithiasis and the IR variation according to age, gender and geography in Denmark. We included data from hospitals as well as from private ear, nose and throat (ENT) clinics. The study was based on registry data on all sialolithiasis cases in Denmark between 2003 and 2009 extracted from the Danish National Patient Registry (hospital cohort) and the Danish Regions Centre for Healthcare Statistics (private ENT clinic cohort). To validate the diagnosis, the proportion of visually confirmed cases was estimated based on patient records from subsamples of the two cohorts. The IR was 7.27 and 14.10 per 100,000 person-years based on visually confirmed cases only and on all cases, respectively. The highest IR was observed among 60- to 70-year-olds, in the North Denmark region and among females. In the validation subsamples, 35% of assumed sialoliths were visually confirmed in the private ENT clinic cohort and 59% in the hospital cohort. In this first population-based study of IR on sialolithiasis, we found a substantially higher IR. With respect to both visually confirmed cases and all cases, this is higher than previously reported from studies based on selected hospital data. 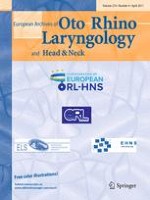 Voice feminization in male-to-female transgendered clients after Wendler’s glottoplasty with vs. without voice therapy support