The disruption of dual antiplatelet therapy (DAPT) due to non-compliance or bleeding is known to significantly increase the risk of adverse outcomes after percutaneous coronary intervention (PCI). However, it is currently unknown if there are differences in the predictors and clinical impact of disruption due to non-compliance compared with bleeding.

The patterns of non-adherence to antiplatelet regimens in stented patients (PARIS) registry was an international, multicenter prospective study of PCI patients discharged on DAPT (aspirin + a P2Y12 receptor). We analyzed the incidence, patient characteristics, predictors, and outcomes in patients with DAPT disruption due to non-compliance as compared to DAPT disruption due to bleeding in the PARIS registry. Predictors of non-recommended disruption and bleeding disruption were assessed using logistic regression. Risks associated with disruption on major adverse cardiac events (MACE, a composite of cardiac death, definite or probable stent thrombosis, spontaneous myocardial infarction, and target lesion revascularization) were analyzed using time-updated Cox regression over 2-year follow-up. 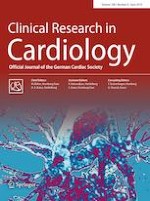 The incidence, indications and predictors of acute pacemaker implantation after ablation of persistent atrial fibrillation