Diseases and tumors of the appendix vermiformis are very rare, except for acute appendicitis. This study aimed to examine rare findings in the histopathologic examinations of specimens of patients undergoing appendectomy due to the diagnosis of acute appendicitis. The files of 1970 patients undergoing appendectomy due to the diagnosis of acute appendicitis between March 2012 and March 2016 were retrospectively investigated. Rare findings were found in 59 (3 %) patients, and these were evaluated in detail. Patients’ age, gender, pathology reports, and postoperation follow-ups were recorded. The rare histopathological findings of 59 patients were examined. Of these, 31 were female (52.5 %) and 28 were male (47.5 %). The average age was 33.1 ± 18.2 years. The unusual findings were as follows: 16 fibrous obliteration, 11 Enterobius vermicularis, 2 schistosomiasis, 3 appendiceal neuroma, 2 granulomatous appendicitis, 1 Crohn’s disease, 3 chronic appendicitis, 1 endometriosis, 2 hyperplastic polyps, 9 mucinous cystadenoma (+mucocele), 8 carcinoid tumors, and 1 lymphoma. All of the malignant tumors were localized in the distal end of the appendix, and all of the patients were treated with appendectomy. Patients with parasitic diseases also underwent anthelmintic treatment, while chemotherapy was administered to the patient with lymphoma. All of the patients diagnosed with malignancy were alive reported no problems at their follow-ups. Although all of the appendectomy samples were normal macroscopically, data from this study suggest that all specimens should be sent for routine investigation. 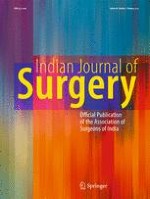 Teachers and Surgeons of the Past

An Analysis of Presentation, Pattern and Outcome of Chest Trauma Patients at an Urban Level 1 Trauma Center

Balloon-Inflated Catheters for Enteral Feeding: a Word of Caution

Introducing In Vivo Dissection Modules for Undergraduate Level Trainees: What Is the Actual Benefit and How Could We Make It More Efficient?