Synaptopodin (SP) is localized within the spine apparatus, an enigmatic structure located in the neck of spines of central excitatory neurons. It serves as a link between the spine head, where the synapse is located, and the endoplasmic reticulum (ER) in the parent dendrite. SP is also located in the axon initial segment, in association with the cisternal organelle, another structure related to the endoplasmic reticulum. Extensive research using SP knockout (SPKO) mice suggest that SP has a pivotal role in structural and functional plasticity. Consequently, young adult SPKO mice were shown to be deficient in cognitive functions, and in ability to undergo long-term potentiation of reactivity to afferent stimulation. However, although SP expresses differently during maturation, its role in synaptic and intrinsic neuronal mechanisms in adult SPKO mice is still unclear. To address this knowledge gap we analyzed hippocampus bulk mRNA in SPKO mice, and we recorded the activity of CA1 neurons in the mouse hippocampus slice, with both extracellular and patch recording methods. Electrophysiologically, SPKO cells in CA1 region of the dorsal hippocampus were more excitable than wild type (wt) ones. In addition, exposure of mice to a complex environment caused a higher proportion of arc-expressing cells in SPKO than in wt mice hippocampus. These experiments indicate that higher excitability and higher expression of arc staining may reflect SP deficiency in the hippocampus of adult SPKO mice.
Anzeige 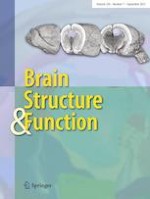