The aim of this study is to evaluate the biomechanical parameters of biceps fatigue (time to claudication during elbow flexion) and strength between the shoulder where the tenotomy has been performed and the healthy arm. The hypothesis of this study was that measuring biceps fatigue may be more useful for determining functionality after tenotomy.

52 patients from 2 hospitals were selected to undergo biomechanical tests of healthy and pathological arms, before and 12 months after surgery. The test consisted of (1) isometric measurement of maximal voluntary contraction (MVC) in elbow flexion and forearm supination (MVS) at baseline conditions. (2) Biceps fatigue test was performed by a submaximal contraction to 33% of MVC maintained at a time as well recorded to the time to claudication. (3) After claudication, measurements of the MVC and MVS were recorded. In addition, the Constant score, SSI functional scale, VAS scale and perceived symptoms were evaluated.

Of the 52 patients included in the study, 26 met the selection criteria. Two patients were lost to follow-up. The mean age was 55 ± 5.6 years. Popeye sign was observed in 58.3% of the cases. Two patients were not satisfied with the results. Preoperatively, MVC was 193.6 ± 55.2 N, which significantly improved after tenotomy to 252.1 ± 61.2 N, but this value was less than the healthy arms (280 ± 68 N). The fatigue time decreased from 141.9 ± 69.7 s preoperatively to 94.2 ± 29.9 s after tenotomy. There was also an improvement in the strength of the arm after the fatigue test. No differences in supination force were found. The Constant, SSI and VAS rating scales improved significantly.

Despite functional improvements of the long head of biceps tendon (LHBT) after tenotomy, this study demonstrates that the shoulder where the tenotomy has been performed will fatigue more quickly than it did preoperatively. Despite this, an improvement in the isometric contraction in flexion of the elbow with respect to the preoperative values. However, this improvement did not reach the flexion power of the contralateral healthy arm. No changes were observed in the supination force of the forearm. 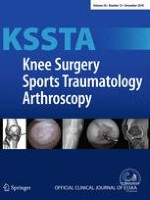