A remarkable example of maladaptive plasticity is the development of epilepsy after a brain insult or injury to a normal animal or human. A structure that is considered central to the development of this type of epilepsy is the dentate gyrus (DG), because it is normally a relatively inhibited structure and its quiescence is thought to reduce hippocampal seizure activity. This characteristic of the DG is also considered to be important for normal hippocampal-dependent cognitive functions. It has been suggested that the brain insults which cause epilepsy do so because they cause the DG to be more easily activated. One type of brain insult that is commonly used is induction of severe seizures (status epilepticus; SE) by systemic injection of a convulsant drug. Here we describe an alteration in the DG after this type of experimental SE that may contribute to chronic seizures that has not been described before: large folds or gyri that develop in the DG by 1 month after SE. Large gyri appeared to increase network excitability because epileptiform discharges recorded in hippocampal slices after SE were longer in duration when recorded inside gyri relative to locations outside gyri. Large gyri may also increase excitability because immature adult-born neurons accumulated at the base of gyri with time after SE, and previous studies have suggested that abnormalities in adult-born DG neurons promote seizures after SE. In summary, large gyri after SE are a common finding in adult rats, show increased excitability, and are associated with the development of an abnormal spatial distribution of adult-born neurons. Together these alterations may contribute to chronic seizures and associated cognitive comorbidities after SE. 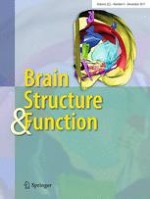 In vivo visualization of the locus coeruleus in humans: quantifying the test–retest reliability