The diagnosis of olfactory dysfunction is mainly based on psychophysical measurements. The aim of the current study was to investigate how well the olfactory functional magnetic resonance imaging (fMRI) can effectively distinguish between normosmic people and subjects with olfactory dysfunction.

The between-group comparison showed stronger odor induced brain activation of the primary olfactory area and the insular cortex among the normosmic group as compared to the dysosmic group. As indicated by the individual analysis, positive responses in the primary olfactory cortex were significantly higher in normosmic people (94%) than in subjects with olfactory dysfunction (41%). However, there was no association between individual fMRI parameters (including the percentage of BOLD signal change, activated cluster size and peak z value), and psychophysical olfactory test scores. Receiver operating characteristic analysis suggested the subjects could not be differentiated from normosmics based on their BOLD signal from the primary olfactory area, orbitofrontal cortex, or the insular cortex. 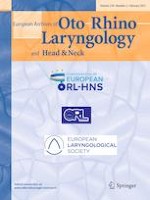 Cricotracheal separation: do not get fooled by what you see

Is taste and smell impairment irreversible in COVID-19 patients?