Colorectal anastomoses after anterior resection for cancer carry a high risk of leakage. Different factors might influence the correct healing of anastomosis, but adequate perfusion of the bowel is highlighted as one of the most important elements. Fluorescence angiography (FA) is a new technique that allows the surgeon to perform real-time intraoperative angiography to evaluate the perfusion of the anastomosis and hence, potentially, reduce leak rate.

The aim of this study was to evaluate the impact of FA of the bowel on postoperative complications and anastomotic leakage after laparoscopic anterior resection with total mesorectal excision (TME).

FA was performed in all patients undergoing laparoscopic anterior resection with TME for cancer followed by colorectal or coloanal anastomosis. Results were compared to a historical controls group of 38 patients previously operated by the same surgeon for the same indication but without the use of FA.

From October 2014 to November 2015, 42 patients underwent laparoscopic anterior resection with TME and FA of the bowel. The surgeon subjectively decided to change the planned anastomotic level of the descending colon due to hypoperfused distal segment in two out of 42 patients in the FA group (4.7 %). Anastomotic leakage, confirmed by postoperative CT scan and water-soluble contrast enema, was found in two cases of a historical controls group and none in the FA group. No adverse events (side effects or allergic reaction) related to FA were recorded. All the other postoperative complications were comparable between the two groups.

In our experience, ICG FA was safe and effective in low rectal cancer resection, possibly leading to a reduction in the anastomotic leakage rate after TME. 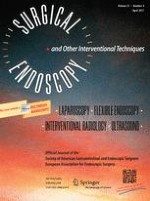