Recent studies have shown the potential benefit of indocyanine green fluorescence imaging (ICG-FI) in lowering the anastomotic leakage (AL) rates by changing the surgical plan. The aim of this study was to evaluate the effect of ICG-FI on the AL rates in laparoscopic low anterior resection (LAR) for rectal cancer.

ICG-FI was associated with significantly lower odds of AL in laparoscopic LAR for rectal cancer.

The study was registered with the Japanese Clinical Trials Registry as UMIN000032654.
Anzeige 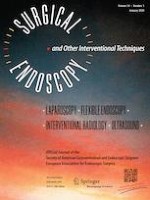