The authors compared N0 with N+ cases in neoadjuvant chemotherapy regression and recurrence. During a 12-year period, 180 consecutive oral squamous cell cancer patients were observed. Of these patients, 78 were N0 and 102 N+ stages. The drugs used were as follows: bleomycin, vincristine, methotrexate, and mitolactol. After three courses of chemotherapy, the regression (complete response (CR), partial response (PR), and no response (NR)) and side effect rate were determined. All patients were operated on and observed for the number and localization of recurrences during 3 year follow-up time. The N0 cases came from T2–3, while N+ was from T2–4a (AJCC 2002). The regression in the N0 group was CR 46%, PR 53%, and NR 1%; but in the N+ group, it was CR 12%, PR 72%, and NR 16%. The regression rate was significantly higher (p = 0.00025) for N0 group than N+ group. The regression rate for T3 N0 was significantly higher (p = 0.055) than for T3 N+ cases. In the N0 stage, the regression rate was significantly higher (p = 0.0174) for T2 than T3. In N+ stage, there was no significant difference (p = 0.183) for T2–4a. The side effects were slight. The recurrence rate for the N0 group was significantly lower (15%, p = 0.000069), while for N+ group, it was 59%. The dependence in the T3 cases was also significant (p = 0.009) in the 3-year tumor-free survival. The N stage seems a more important prognostic factor for chemotherapy response and recurrence rate than the T stage. Stage III can be divided into subgroups without metastasis (III.a) and with metastasis (III.b.), based on significant difference in regression and recurrence rate. 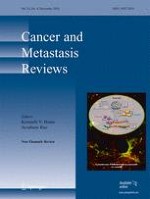 Perspectives on the mesenchymal origin of metastatic cancer

Erratum to: microRNAs and lung cancer: tumors and 22-mers

The guardians of the genome (p53, TA-p73, and TA-p63) are regulators of tumor suppressor miRNAs network

DNA methylation or histone modification status in metastasis and angiogenesis-related genes: a new hypothesis on usage of DNMT inhibitors and S-adenosylmethionine for genome stability

Stem cell marker olfactomedin 4: critical appraisal of its characteristics and role in tumorigenesis