Clinical trials funded by industry and those funded by non-profit institutions may differ in their results and conclusions [ 1– 5]. Several evaluations have compared trials with and without industry funding on reported efficacy, harms, conclusions, and risk of bias [ 6]. Most of these studies addressed single or few topics and none focused on intensive care. Between 2006 and 2012, 33% of the trials registered on Clinicaltrials.gov were funded by industry [ 7], but industry overall spends more on clinical research than public funders [ 8] and has unavoidable financial incentives to get favorable conclusions.
Industry may interfere at all steps of the research pipeline, including production of evidence (both fundamental and clinical research) [ 9], evidence synthesis (including ghostwriting) [ 9– 11], and decision-making [ 9]. For randomized controlled trials (RCTs), industry sponsors can influence study outcomes by various means: e.g., choosing inactive or strawman comparators [ 12] or selectively reporting favorable results with spin [ 13]. The degree of financial involvement also varies. Industry may be the only funder or one among multiple funders, or it may offer drug/placebo or technical support. However, it often remains unclear in published papers whether industry sponsors have exerted a catalytic, modest, or no influence on the paper. CONSORT requires reporting of funding sources and conflicts of interest [ 14], but reporting remains suboptimal [ 15]. There is even less transparency on industry-led ghostwriting of the published reports [ 16].
Anzeige
Intensive care research is often stated to be underfunded by the National Institutes of Health (NIH) compared to the burden of critical illnesses on healthcare in the USA [ 17, 18] and similar issues exist also in other countries where intensive care is widely employed. Unmet needs raise the stakes for sponsors and manufacturers; yet little is known on the funding landscape of intensive care research. Here, we assessed to what extent critical care research (specifically RCTs) is funded by industry and whether there are clear differences in the results and conclusions of trials by different sponsors. Therefore, we conducted a meta-epidemiological overview of systematic reviews of RCTs conducted in critical care settings.

We searched PubMed (March 1, 2018) for meta-analyses and Cochrane Database Systematic Reviews (CDSRs) using the following keywords in their titles: respiratory failure, acute respiratory distress syndrome, ventilation, ventilated, critical care, intensive care, septic shock, sepsis, fluid, fluid resuscitation, hydroxyethyl starch, or albumin (Supplementary file). Recent articles published online between 2015 and 2018 were screened; for older reviews published pre-2015, only CDSRs were screened because the source of funding for included trials is rarely reported in meta-analyses published in journals.
After removing duplicates, two reviewers (PJ and IAC) screened titles/abstracts and, if needed, full texts for eligibility. Systematic reviews that included meta-analyses of RCTs evaluating an intervention in the critical care setting were eligible if they also reported funding source(s) for each included RCT. When study-level funding information was unavailable in the systematic review, we perused the full text of each RCT to identify its funding whenever the interventions pertained to drugs or biologics (excluding supplements, fluids, antiseptics, probiotics), since these interventions are likely to have interested sponsors. Reviews of non-randomized studies and those without meta-analysis were excluded.

For each eligible review, we screened all RCTs included in the meta-analyses to determine funding sources: industry funding only; no industry funding; mixed sources of funding (industry and non-profit institutions); intervention supplied by industry; and not reported. If not available or unclear in the systematic review, the information was extracted from the full-text RCT article. For overlapping meta-analyses, we retained the most recent one, or the largest, when publication years were identical.
Anzeige
For meta-analyses including both RCTs with industry funding and RCTs without industry funding and using primary binary outcomes, we extracted information on setting (ICU, surgical ICU, mixed), population (preterm, infant, child, adult), type of the intervention (device, pharmacological, procedure), type of comparator (active, placebo, no intervention), and number of primary outcome events per arm. Whenever multiple primary outcomes existed or no single outcome was clearly identified as such, we selected the primary outcome with the largest number of included studies (in ties, largest sample size; and further ties, largest number of events).
For RCTs funded by industry (fully or mixed source) or supplied by industry, we identified whether interventions involved in the comparison were manufactured by the industry sponsor. Three scenarios were identified: one arm of the comparison contains a sponsor-manufactured intervention (SMI), both arms contain SMIs, and none of the arms contain SMIs. All comparisons were coined so that experimental arms were always an SMI versus a control. When both arms contained SMIs, the SMI considered as the experimental arm was chosen to be the most expensive one, and, when both arms contained equally expensive interventions or this was unclear, the SMI considered the experimental intervention was chosen to be the most recent one (as suggested by the original article). When trials were industry-funded but had no SMI involved in the comparison that we examined, they were excluded from quantitative analysis as they are not informative about sponsor bias.

In a further exploratory analysis, we evaluated the conclusions of the abstracts of the trials with industry funding and of those without industry funding for topics that were eligible for ROR analyses. Conclusions were considered as “negative” (unfavorable) if trials concluded that the experimental SMI was less effective, more harmful or not more effective (for superiority trials) without mentioning any potential positive trade-offs [e.g., good safety, lesser cost, possible benefit in subgroups/specific patients, worth studying further (in more long-term and/or larger studies) for potential benefits] or it was squarely stated that it is not recommended. All other scenarios were classified as “positive” conclusions, including those where the experimental SMI was equally effective as an active comparator, those where positive trade-offs were mentioned, and those where it was more effective than comparators.
Anzeige
Results were reported in 2 × 2 tables. We calculated the arcsine difference of having a negative conclusion for each topic and then the summary arcsine (AS) estimate across topics using random effects. The arcsine transformation enables one to obtain a more robust estimate while including 0 cells in the analysis without continuity corrections [ 23]. AS > 0 implies that conclusions are more favorable in industry-funded trials.

Twenty-five otherwise eligible topics could not be assessed for a comparison of trials with versus without industry funding because they only included trials with the same source of declared funding (Table  2). For 17 topics none of the trials had industry funding, for one topic all the trials had industry funding, and for another one all trials were funded both by industry and not-for-profit sources. The 25 topics include a total of 113 RCTs of which 20.3% (23/113) did not report their source of funding.
Table 2
Topics reporting the same source of funding across all randomized controlled trials with declared funding
References of the reviews are available in the supplementary information
NA original article not accessible or not in English
aAll included trials in the reviews were in Chinese

In another two topics, both trials with and without industry funding were available, but the industry funder did not manufacture any of the interventions for the comparison that we assessed. In one case, we were interested in the comparison of midazolam versus placebo, but an AstraZeneca-funded trial included a third arm of morphine (manufactured by the company) (eTable 1). Four other trials in other topics did not have SMIs in the two compared arms, but for their topics there existed also other industry-funded RCTs involving SMIs in the comparisons (eTable 1).
Anzeige

An additional seven topics were excluded from the ROR analysis because they only had primary continuous outcomes, covering 79 RCTs of which 35 were with industry funding (fully and mixed sources) and 22 were without industry funding (non-profit and supplied by industry) (eTable 2). The outcomes assessed were ventilation duration and other related outcomes such as weaning time or ICU length-of-stay and biological measurement such as cytokine levels.

Trials included in the ROR analyses

Thirty-three topics covering 363 RCTs were included in the comparison of the relative treatment effect of trials with versus those without industry funding. Their summary characteristics appear in Table  1 and detailed topic-specific results appear in Table  3. Out of the 126 RCTs with a connection with industry (fully funded, mixed source, or supplied by industry), 113 had only one SMI in the comparison and 13 had both arms with SMIs (in 5/13 trials the comparison involved a combination of two drugs versus a single drug by the same sponsor; in 5/13 trials the comparison addressed strategies of ventilation, tracheostomy, antibiotics, or sedation and the sponsor manufactured ventilators, tracheostomy equipment, antibiotics, and sedatives, respectively; in 2/13 trials the sponsor manufactured the fluids compared head-to-head; in the remaining trial, two companies sponsored the trial comparing their products head-to-head) (eTable 1).
Table 3
Individual ROR and OR with and without industry funding for each topic
References of the reviews are available in the supplementary information
ARDS acute respiratory distress syndrome, COPD chronic obstructive pulmonary disorder, FU follow-up, ICU intensive care unit

The sensitivity analysis excluding trials supplied by industry and trials with an SMI in both arms of the comparison resulted in sROR = 1.22 [95% CI (1.02–1.45)] with significantly more favorable outcomes in trials without industry funding compared with trials with industry finding. There was no evidence of heterogeneity [ I 2 = 3%, 95% CI (0–44%), τ 2 = 0.0065, p value = 0.42]. The other sensitivity analyses did not substantially change the results observed in the primary analysis (Table  4, eFig. 3 and eTable 3).

METRICS is supported by a grant from the Laura and John Arnold Foundation. The work of JPA Ioannidis is supported by an unrestricted gift from Sue and Bob O’Donnell. The authors assume full responsibility for the accuracy and completeness of the ideas presented.

All authors declare that they have no potential conflicts of interest.

All the data collected for this study are available from the authors.
Open AccessThis article is distributed under the terms of the Creative Commons Attribution-NonCommercial 4.0 International License (http://creativecommons.org/licenses/by-nc/4.0/), which permits any noncommercial use, distribution, and reproduction in any medium, provided you give appropriate credit to the original author(s) and the source, provide a link to the Creative Commons license, and indicate if changes were made. 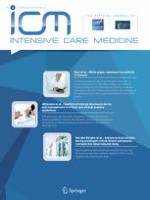 Declaration of conflicts of interest: a ‘crooked’ line towards scientific integrity

Do I have a conflict of interest? Yes

Professional medical societies: do we have any conflict of interest with industry?

Conflicts of interest in infection prevention and control research: no smoke without fire. A narrative review