The aim of this study was to evaluate the influence of Er,Cr:YSGG laser irradiation on the bond strength of different self-etch adhesives systems in normal and artificially hypermineralized dentin.

Lower μSBS values were found for the (3) and (5) in experiments with both adhesives.

Single Bond Universal self-etching adhesive, after preliminary etching with phosphoric acid, showed highest μSBS values for both substrates in accordance with the manufacturer’s recommendations. The μSBS values were higher for the control treatment using Clearfil SE Bond for both substrates. It may be possible the option of employing the Clearfil SE Bond in dentin sclerotic without the need for complementary etching treatment. 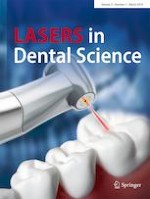 Use of carbon dioxide lasers in dentistry

The use of four different lasers in a “surgery first” case, for orthodontic movement acceleration, paresthesia, aphthous ulcer, edema, and pain control

The effect of photobiomodulation therapy in the management of alveolar osteitis after tooth extraction: a scoping review