The standard treatment of femoral diaphyseal fractures is intramedullary nailing. Torsion error remains a largely unsolved problem. We hypothesized that femoral malrotation would change the coronal alignment of the lower extremity and the center of force (COF) in the tibiofemoral joint as compared to the native state.

Ten cadaveric legs were used. Intraarticularly placed sensor foil was used to measure contact pressures for each condyle. The resultant pressure of this two-force measurement was calculated as the COF for the joint. Mechanical axis was defined by the navigation system. Two novel devices were used: (1) to simulate bodyweight with leg attachment and fixation to the anterior pelvis and (2) to fix the femur at various degrees of malrotation. A mid-diaphyseal osteotomy was performed and the distal fragment was rotated both internally and externally in 5° increments to a maximum of 25°. COF and axial alignment were assessed at each step with application of a half-bodyweight specific to each specimen.

Internal rotation resulted in valgus deviation of the mechanical axis and a shift in COF towards the lateral condyle (P < 0.05). External rotation caused varus deviation and switched COF towards the medial condyle (P < 0.05). This study shows that femoral malrotation has a significant effect on mechanical axis alignment and force vectors within the knee. Correlation with clinical outcomes is necessary and further research into minimizing such errors of torsion is warranted.

Torsion errors are not merely cosmetic issues, but may result in further morbidity, such as varus or valgus deformity and shifting of the COF, which may lead to joint arthrosis.
Anzeige 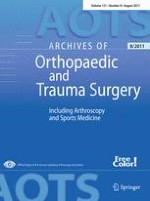 Diagnosis and treatment of ganglion cysts of the cruciate ligaments